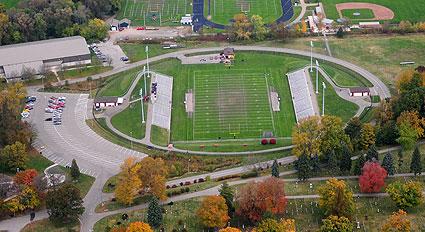 Holland Municipal Stadium, the home of Hope College Flying Dutchmen football since 1979, could soon have a new playing surface.

The Holland City Council has taken the next step that could lead to the installation of synthetic turf at the stadium in time for the next (2012) season.

City of Holland officials and representatives from Hope College and Holland Public Schools are working on an agreement that would create a joint partnership for developing a stadium facility of greater quality as well as a long-term management plan. Formation of the formal partnership is in process.

Holland City Council action on December 14 authorized seeking proposals for the design and engineering costs that would lead to the synthetic turf installation.

The Flying Dutchmen have played their home football games at city-owned facilities for many decades. Hope called Riverview Park (now a recreation area near FreedomVillage) their home from 1932-78.

The Flying Dutchmen moved to the newly constructed Holland Municipal Stadium, which is south of the college's outdoor athletic complex, in 1979. The lighted stadium seats more than 5,000 fans. It is shared with the Holland High School football team. Because of the amount of use by the two programs, the natural grass surface has frequently deteriorated over the course of the season.

The Flying Dutchmen have a 33-year record of 89-56-3 at Holland Municipal Stadium, including a 4-1 mark this past season.

Just east of Holland Municipal Stadium, construction is underway on a new college-owned 12-court outdoor tennis stadium. The complex will provide Hope athletes with a site they have needed for years and will serve community tennis enthusiasts. It is scheduled for completion next summer.