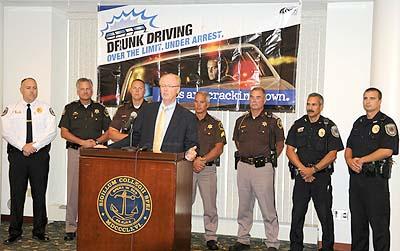 Summer is winding down and soon it will be time for college students to head back to school and as thousands of Michigan residents hit the road for one last get-away, law enforcement officers will also be taking to the streets to ensure safe travels during the Drunk Driving. Over the Limit. Under Arrest. crackdown.

"During this busy travel season, it is important to stay vigilant and keep our roads as safe as possible," said Michael L. Prince, director of the Michigan Office of Highway Safety Planning (OHSP). "By promoting the crackdown ahead of time, we are hoping motorists will make the smart decision not to drive drunk."

The stepped up enforcement is paid for with federal traffic safety dollars earmarked for drunk driving and seat belt enforcement. The enhanced patrols are in addition to scheduled shifts and paired with an advertising campaign, designed to raise awareness about the crackdown and encourage motorists to avoid the dangers of drunk driving as well as the high costs of a drunk driving conviction.

Motorists convicted of a first drunk driving offense face up to 93 days in jail, up to a $500 fine, up to 360 hours of community service, six points on a driver's license and up to 180 days' license suspension. In addition, convicted drunk drivers will be subject to a $1,000 fee for two consecutive years, for a total of $2,000 in additional costs. Anyone who refuses a breath test the first time is given an automatic one-year driver's license suspension.

Motorists convicted for drunk driving for the first time with a .17 blood alcohol content face increased penalties including the possible installation of an ignition interlock device preventing the car from starting if the driver has been drinking.

Last year, 357 people were killed in impaired driving crashes in Michigan, including 10 of the 21 people who died in alcohol and/or drug-related crashes during the Labor Day holiday.

For a listing of planned enforcement times, dates and locations, visitwww.michigan.gov/ohsp.