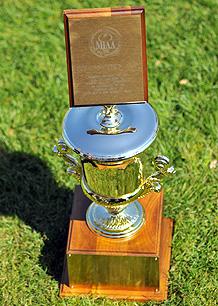 The MIAA Commissioner's Cup award is based on the cumulative performance of each member school in the league's 18 sports for men and women.

Hope tops the Commissioner's Cup standings after the winter season by 15 points. Hope is also atop the men's all-sports standings while Hope and Calvin share first place in the women's all-sports standings. . During the winter season Hope won the men's basketball crown and finished second in women's basketball, men's swimming and diving and women's swimming and diving.

Hope won the 2010-11 Commissioner's Cup, marking the 11th consecutive year atop the standings.