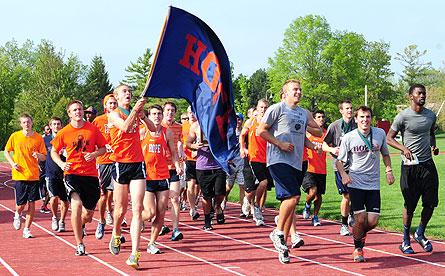 Excellence in intercollegiate sport is a tradition that runs deep at Hope College. It is evidenced in numerous ways, many that are time-honored and others that are new-found. There were evidences of both throughout the 2011-12 school year.

Hope, for an unprecedented 12th consecutive year, claimed the Commissioner's Cup for having the best overall athletics program in the Michigan Intercollegiate Athletic Association. The college's margin of victory of 31 points in the final standings was the widest since the performances of men's and women's sports were combined to determine the winner in 1981-82. Hope has now achieved the distinction a record 34 times. During the year Hope advanced eight out of a possible nine teams to the MIAA's post-season tournaments which determine the league qualifier to the NCAA championships.  In all, teams or individuals advanced to 11 NCAA championships during the year.

Spring  teams were major contributors to the overall success with conference championships won in three sports, including a major accomplishment in track and field. For the first time in school history, both Hope track and field teams were conference champions in the same year, the men's team winning the title outright and the women's team gaining a co-championship with rival Calvin. The outright championship by the men was the first since 1986 when current coach Kevin Cole attended his alma mater and established the school record in the 800-meter run. This spring the 800 mark was broken by junior Joel Rietsema who went on to achieve NCAA All-America distinction with a fourth place finish at nationals. After setting the Hope mark in 1988, Cole was presented the track jersey worn by previous record holder Steve Hulst '80. He passed-on that jersey to Rietsema.

The MIAA champion men's golf team advanced to the NCAA championships for the sixth time this decade. Lacrosse for men and women closed the book on their histories as club teams in anticipation of becoming intercollegiate sports next school year.

An amazing blend olf the old with the new in Hope's 147th year.