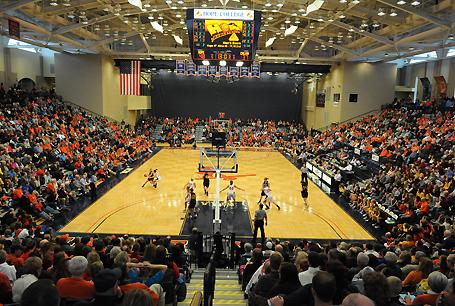 It marks the second year in-a-row that both the women's and men's
basketball programs have been ranked number one. No Division III
member has accomplished that fete.

According to an NCAA announcement, Hope averaged 1,343 fans over 13
home dates. The average home game attendance among all 429 Division
III women's basketball programs in 2011-12 was 229 fans. Hope was the
only team to average more than 1,000 fans per home date. Rival Calvin
and national champion Illinois Wesleyan tied for fourth in attendance
last season as each averaged 664 fans.

The Flying Dutch, who posted an overall 22-5 record, were 12-1 on
their home court. The annual home rivalry game with Calvin attracted
the largest crowd (2,815).

Hope's six-season record at DeVos Fieldhouse is 108-3. That included a
77-game home floor winning streak. In 16 seasons under coach
Morehouse, the Flying Dutch are 221-22 (.909) on their home floor.