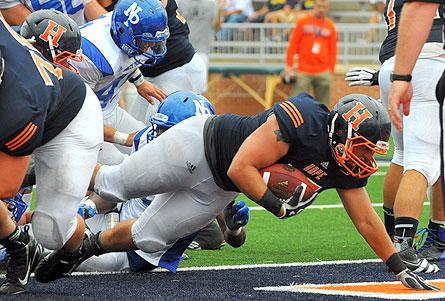 The Flying Dutchmen continue a series of four consecutive non-league games against Illinois opponents, traveling to Millikin University in Decatur, Ill. The game will be broadcast by 92.7THEVAN-FM and streamed on the internet.

Hope is seeking its first-ever victory over Millikin in a series that started in 2010 with a 31-21 Big Blue victory. A year ago Millikin prevailed 27-15.

Both teams won their season opener , Hope at home over North Park 42-24 and Millikin on the road over Greenville 50-10.

This is the first of back-to-back road games for the Flying Dutchmen. On Saturday, Sept. 15,  Hope travels to Concordia-Chicago as part of the inaugural Challenge Series between teams of the Michigan Intercollegiate Athletic Association (MIAA) and the Nothern Athletics Conference (NAC). The next home game will be Saturday, Sept. 22, against a third CCIW opponent, Illinois Wesleyan.