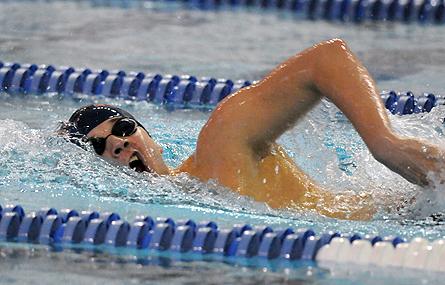 Hope College launches its swimming/diving season on Friday, Oct. 19, by competing in the MIAA Relays to be hosted by Calvin College at its Venema Aquatic Center. The meet involving all MIAA-member colleges will begin at 6 p.m. The meet is non-traditional in that every event is a relay. The outcome does not figure into the conference standings.

Developing young talent will be the name of the game for the Flying Dutchmen this season.

Hope adds 11 new athletes to the team and will look to the talented newcomers to fill in the openings left by graduated seniors.

Leading the way for the Dutchmen this year are seniors Josh Grabijas (Howell/Howell HS) and Nick Hazekamp (Janesville, Wisc./Joseph A. Craig HS) as they return for their final season. Both are returning MIAA individual conference champions and members of the MIAA all-conference team.

Grabjias earned MIAA championship titles in the 500-yard freestyle and the 1,650-yard freestyle. His time in the 1,650 was a Hope College record as well as an MIAA league record. It also qualified him for a third consecutive trip to the NCAA Championships where he placed 12th and earned Honorable Mention All-American.

Hazekamp finished first in both the 100-yard and 200-yard backstroke at the 2012 MIAA Championships.

The large incoming class combined with the group of returnees will provide depth for Hope in the breaststroke, butterfly and distance freestyle events.

The Flying Dutch look to build on the success from last year and have high hopes for the new season.

Coming off a second place finish in the Michigan Intercollegiate Athletic Association (MIAA), the Flying Dutch will rely on their experienced returnees to lead the way in the pool.

Westrate, Holstad and Sheldon also return this year with experience from the 2012 NCAA Championships.

Kyleigh Sheldon qualified for the NCAA Championships on the one-meter and three-meter boards, finishing 19th and 21st respectively.

The Flying Dutch add 17 new athletes to the squad this year that look to make a significant contribution to the team. The added depth brings strength to the freestyle and backstroke events as well as team relays.