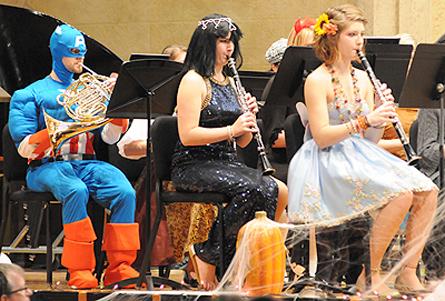 The concert will celebrate John Williams’ 80th birthday (Feb. 8, 1932) by featuring some of his best-known film scores such as “Star Wars,” “Superman” and “Indiana Jones.”  The concert will also include chilling works such as “Incantation and Dance,” by John Barnes Chance; “To Set the Darkness Echoing,” by Dana Wilson; and “Lost in the Funhouse,” by Jeffrey Hass.

“The concert will feature a variety of music for all ages. People are encouraged to come in costume,” said Gabe Southard, who is director of the Wind Ensemble and an assistant professor of music. There will be an instrumental petting zoo for younger students interested in trying instruments after the performance.

Southard, who joined the Hope faculty in 2007, completed his Doctorate of Musical Arts in conducting at Michigan State University. Prior to his residence at MSU, he served as wind symphony conductor and flute studio teacher at the University of Michigan-Flint, where he also taught orchestration, music appreciation and advanced conducting.