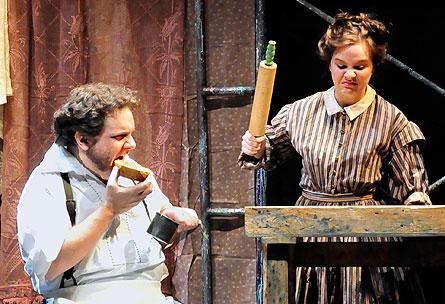 Hope College Theatre will present “Sweeney Todd” on Friday and Saturday, Nov. 9-10, and Wednesday-Saturday, Nov. 14-17, at 8 p.m. in the DeWitt Center main theatre.

Stephen Sondheim’s musical “Sweeney Todd: The Demon Barber of Fleet Street” is set in 19th-century London and tells the tale of a famously barbaric barber. Throughout the musical, the character of Sweeney Todd seeks revenge on the judge who both framed him and destroyed his family. He spreads his desire for vengeance throughout the city, one bloody shave after another. The piece features complex melody lines and striking choral compositions. Winner of eight Tony Awards during its original run, “Sweeney Todd” is one of Sondheim’s most well-known works.

“Sweeney Todd is a massive undertaking to produce,” said guest director Curt Tofteland, who is founder of Shakespeare Behind Bars, Equity actor, and former Producing Artistic Director of Kentucky Shakespeare Festival.  “To bring this seminal work of Stephen Sondheim to life on Hope College’s theatre stage, I am thankful to be working with a talented group of artists, many of whom are new to Hope College Theatre productions.”

In addition to Tofteland, the production team includes a mix of members of the Hope community as well as guest artists.  Music direction and soloist vocal coach is area artist Joseph Byrd. Brad Richmond, professor of music and director of choral activities is choral director.  Gabe Southard, assistant professor of music and director of bands, is the orchestra conductor. Grand Rapids artist Kyle Dutkiewicz is the choreographer. Costume design is by Michelle Bombe, resident costume designer and professor of theatre. Perry Landes, associate professor of theatre, is the stage manager. Sarah Watkins, a 2008 Hope graduate and MFA recipient from Northwestern University, is the scenic and props designer.  Lighting design is by fellow Northwestern MFA graduate Rebecca Jeffords. Rounding out the design team is another Hope College alumnus, 2010 graduate Ken Chamberlain as sound designer.

Tickets for “Sweeney Todd” are $10 for regular admission, $7 for senior citizens and Hope faculty and staff, and $5 for students, and are available at the ticket office in the main lobby of the DeVos Fieldhouse.  The ticket office is open weekdays from 10 a.m. to 5 p.m., and may be called at (616) 395-7890.

The DeVos Fieldhouse is located at 222 Fairbanks Ave., between Ninth and 11th streets. The DeWitt Center is located at 141 E. 12th St., on Columbia Avenue at 12th Street.