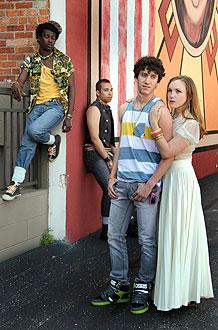 When faced with great odds, it is up to love to lay things straight. Director Curt L. Tofteland’s new modern adaptation of William Shakespeare’s Romeo + Juliet is passionate, swift and brutal.

Set against a backdrop of modern urban warfare and violence, the young, star-crossed lovers of Shakespeare’s most beloved play must overcome great obstacles, unlike anything they have seen before. Romeo + Juliet will be performed at the DeWitt Theatre (141 East 12th Street) at 8:00 pm on July 12, 13, 18, 23, 26, 31, August 3, 5 and 8.  Romeo and Juliet is a haunting reminder that love is the strongest weapon at our disposal.

Romeo + Juliet will feature a diverse cast that highlights the differences in our culture in an invigorating contemporary style. This classic tragedy that dives into the issues plaguing the modern world will be performed in record time; about 90 minutes. This new adaptation provides a vehicle to explore one of the societal problems that are affecting today’s youth, gang warfare.  After every performance a talk back will be held with members of the cast and members of the Shakespeare Behind Bars program founded by the director of this production, Curt L. Tofteland.

Curt L. Tofteland makes his HSRT directing debut with Romeo + Juliet.  No stranger to the Hope College stage, Tofteland directed the wildly successful Sweeney Todd: the Demon Barber of Fleet Street last fall.  He is the founder of the internationally acclaimed Shakespeare Behind Bars (SBB) program. From 1995-2008, he facilitated the SBB/KY program at the Luther Luckett Correctional Complex, producing and directing fourteen Shakespeare productions. The 2003 SBB/KY production of The Tempest, was chronicled by Philomath Films in a documentary, Shakespeare Behind Bars, that premiered at the 2005 Sundance Film Festival and went on to be screened at 40+ film festivals around the world, winning 11 film awards.

Tofteland currently facilitates the adult Shakespeare Behind Bars/Michigan program at the Earnest C. Brooks Correctional Facility in Muskegon Heights and SBB’s first co-gender, court-ordered juvenile Shakespeare Behind / Beyond Bars programs at the Ottawa County Juvenile Detention Center and the Juvenile Justice Institute. Tofetland is a national and international speaker. He has spoken at over forty colleges and universities across the United States and has delivered talks at TEDx Berkeley, TEDxEast (NYC), and TEDx Macatowa. For his work as a Prison Arts Practitioner, he received fellowships from the Fulbright and Petra Foundations, as well as a Doctorate of Humane Letters from Bellarmine University. He is a published essayist and poet. Currently, he is writing his own book, Behind the Bard-Wire: Reflection, Responsibility, Redemption, & Forgiveness . . . The Transformative Power of Art, Theatre, and Shakespeare. From 1989-2008, he served as Producing Artistic Director of Kentucky Shakespeare Festival where he produced fifty Shakespeare productions, directed twenty-five Shakespeare productions, and acted in eight Shakespeare Productions.