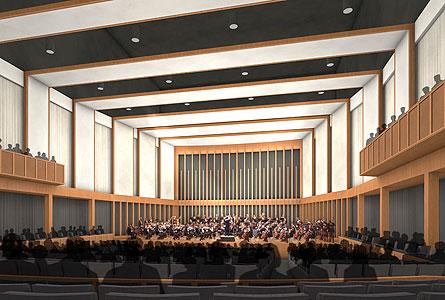 A major gift to Hope College will add organ music to the variety of concerts audiences will be able to enjoy in the new Jack H. Miller Center for Musical Arts.

David P. Roossien of Holland has provided funding for the organ as a reflection of his life-long appreciation of music and his long-time enjoyment as a community member of music events at the college.  To be custom-built for the college by Casavant Frères (Casavant Brothers) of Saint-Hyacin the, Quebec, Canada, the organ will make the Jack H. Miller Center for Musical Arts the only purely musical hall in West Michigan with an embedded concert organ.  The new three-manual and pedal organ will have 54 ranks of pipes, for a total of 3,092 pipes, ranging from some 20-feet tall to the size of a pencil.

“West Michigan is fortunate to have many fine pipe organs, but the organ for the new concert hall will be an exciting and unique addition to the area because there is nothing like it along the lakeshore,” said Dr. Huw Lewis, professor of music and college organist at Hope.

“This organ is not designed to be a solo recital instrument or a church organ.  Rather, it’s been designed principally to play the organ parts of the great orchestral literature,” he said.  “Such parts often require an organ to have a huge dynamic range—much greater than is required for solo or church repertoire.  On the one hand it must be so soft as to be almost inaudible while, on the other, it must be powerful enough to stand its own against, and at times dominate, a full symphony orchestra playing flat out.”

To provide the greatest flexibility for the center’s main concert hall, which will host a variety of groups and will seat 800, the organ console will be movable, so that it can be placed center-stage, to the side or removed entirely depending on the needs of the performance.

Casavant Frères was founded in 1879 by two brothers, Claver and Samuel Casavant. Across its history, the company has built nearly 4,000 instruments in concert halls and churches across the United States and Canada as well as overseas.

Prominent concert halls featuring organs built by Casavant Frères include the John F. Kennedy Center for the Performing Arts in Washington, D.C., and the Kauffman Center for the Performing Arts in Kansas City, Mo.  This year, Casavant is completing the installation of two new concert hall organs, at La Maison Symphonique de Montréal, the new home of the Orchestre Symphonique de Montréal, and at the Palais Montcalm in Quebec City, where the chamber orchestra, Les Violons du Roy, is in residence.  Among other projects, the company installed new pipe organs in concert halls in China and in Puerto Rico, and remodeled the organ featured in the Orchestra Hall of the Chicago Symphony Orchestra.

The new instrument will join three other major concert or teaching organs on campus.  The new building will also house a teaching instrument constructed by J.W. Walker and Sons Ltd. of Suffolk, England, that was dedicated in October 2000 and will be relocated from its current home in Nykerk Hall of Music, the facility that the new center is replacing.  In addition, Dimnent Memorial Chapel features both a Chancel Organ, which was built in 1929 by the Skinner Organ Company of Boston, Mass., and renovated in 2005 and 2006, and a Gallery Organ, built in 1970 by Pels and Van Leeuwen Organ Company of Alkmaar, the Netherlands.

The “Jack H. Miller Center for Musical Arts” will include two performance venues, classrooms, practice rooms, faculty studios and office space for the department of music.  The center is being named in honor of Jack H. Miller, who provided a major gift for the project, in recognition of his lifetime of generosity to the college.

The 64,000-square-foot complex will be built along Columbia Avenue between 9th and 10th streets for a total of $35 million including construction costs and an endowment for maintenance.  Groundbreaking could be as early as October of this year with completion anticipated in the fall of 2015.