August 30, 2013 — by Hope PR
From left to right, Dañel Malán, Ajai Terrazas-Tripathi, Tricia Castañeda-Gonzáles, and Daniel Moreno in Milagro Theatre’s bilingual (Spanish/English) production of “Frida, un retablo,” which the company will present at Hope College on Saturday, Sept. 14, at 7 p.m. in the DeWitt Center main theatre as part of the 2013 Tulipanes Film and Music Festival. (Photo by Russell J. Young) 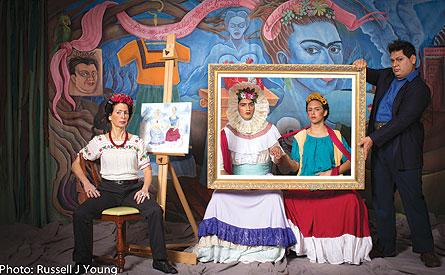 Milagro Theatre of Portland, Ore., will present its bilingual (Spanish/English) production of “Frida, un retablo” at Hope College on Saturday, Sept. 14, at 7 p.m. in the DeWitt Center main theatre as part of the 2013 Tulipanes Film and Music Festival.

“Frida, un retablo,” by Milagro’s artistic director, Dañel Malán, is presented as a tapestry reflecting the rich and turbulent life of Frida Kahlo, one of Mexico’s most important artists.  It will be performed by four actors portraying several characters; in addition to three aspects of Frida herself, they include her husband, Mexican artist Diego Rivera; Russian revolutionary Leon Trotsky; and French surrealist André Breton.

The production, which is a little more than one hour in length, is best suited for adults and children above middle school age.  Reservations are not necessary, and all seating will be general admission.  The DeWitt Center is located at 141 E. 12th St., facing Columbia Avenue at 12th Street.

While in Holland, members of the Milagro Theatre will also conduct several free workshops for both high school students and adults at the Holland Civic Theatre, located at 50 W. Ninth St.

The high school workshops will take place during the afternoon on Friday, Sept. 13, and are being coordinated by the department of theatre at Hope and local high schools.  Detailed information can be obtained by contacting Reagan Chesnut, theatre office manager, or John Tammi, professor of theatre, at (616) 395-7600 or tammi@hope.edu.