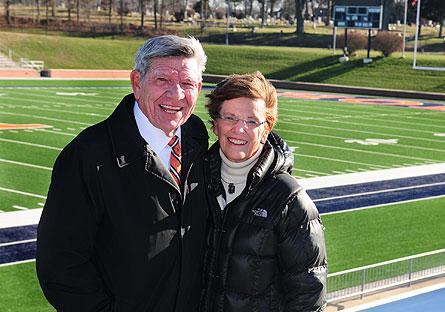 Hope College will formally name its football stadium in honor of longtime coach Ray Smith and his wife, Sue, today as part of the college's 48th annual Community Day festivities.

Hope College will formally name its football stadium in honor of longtime coach Ray Smith and his wife, Sue, today as part of the college's 48th annual Community Day festivities.

During pre-game festivities at approximately 1:15 p.m., President Emeritus Jim Bultman will be joined by alumni football players and current team members in recognizing the Smiths.

Before the game, football alumni will be guests of the college at the Community Day picnic on Windmill Island Gardens.

The Flying Dutchmen will host Millikin, Ill. for their second game of the season. Kickoff will be 1:30 p.m.

Holland Municipal Stadium was the home of Hope College football from 1979 to 2011. The stadium was purchased by the college from the City of Holland in 2012.

Ray Smith coached Hope football for a quarter of a century (1970-94). He is the winningest football coach in the history of the Michigan Intercollegiate Athletic Association (MIAA) and his 25-year tenure remains the longest of any football coach in America's oldest college athletic conference.

"Ray Smith has left a winning-with-integrity legacy in intercollegiate sport at Hope, in the MIAA, and nationally at the Division III level of the NCAA," said Dr. Bultman when announcing the stadium naming last spring. "As a coach and athletic director he inspired an exemplary athletics program and he did it the right way – with humility, fair play and wholesome balance within the spiritual, academic and social aspects of college life."

"It is most appropriate that the stadium be named in honor of both Ray and Sue. No coach achieves success to this degree without an understanding and supportive spouse. Sue has been this for Ray throughout his long illustrious career in sport," Bultman said. "Together they have made a difference at Hope and in the Holland community."

Smith was a football All-American at UCLA,  playing at both fullback and defensive back. He was captain and most valuable player of the Bruins his senior year.

A member of the Hope faculty until 2009, he mentored hundreds of Hope students through his work both in the classroom and on the athletic field. His football teams earned an overall record of 148-69-9, including nine MIAA championships. In 1984 he was named the NCAA Division III Co-Coach of the Year. At the time of his retirement as football coach in 1994 he was the eighth-winningest coach in NCAA Division III history. During his tenure he also served as golf coach, wrestling coach and assistant baseball coach. He was the director of athletics from 1980-2009. During that time, Hope won 24 MIAA All-Sports awards.

In 1999 he received the "Lifetime Achievement Award" at the West Michigan Sports Awards banquet, and in 2006 his hometown of Riverside, Calif., inducted him into its Sports Hall of Fame. Honors from Hope have included the 2002 "Vanderbush-Weller Development Fund" award in recognition of his personal integrity and the modeling of the Christian faith in his work with students, and having the weight room in the DeVos Fieldhouse named for him and Sue in 2005.