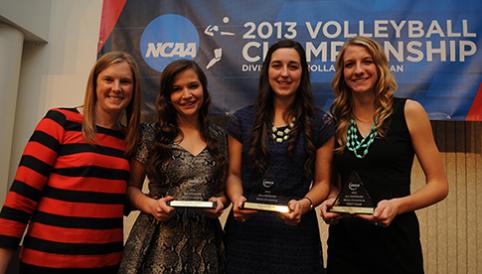 Grasmeyer headlines a group of four Flying Dutch to receive All-America recognition from the AVCA.

The junior from Jenison (Hudsonville Unity Christian HS) has been selected a First Team All-American for the second season in a row and second time in her career.

"Jenna is a special talent and I am proud of her continued hard work both on the court and in the weight room," Hope coach Becky Schmidt said of Grasmeyer, pictured at right. "She is a kind and generous teammate, but a terminator on the court.  Her improvements in passing, defense, and serving have made her a very well-rounded player."

The awards will be presented Thursday at the NCAA Division III Women's National Championship banquet at Hope College.

"To come back from an ACL tear last year and have an All-American season is quite a story - and one attributable to her work ethic, commitment and motivation," Schmidt said. "I am so proud of her and feel that this honor is not just well deserved but an inspiration to anyone that has been dealt a blow of adversity.  Courtney has not just brought an aggressive swing and strong block to our court but a composure that maintains our confidence even when we are struggling."

Hazekamp is a sophomore setter from Fruitport (Fruitport HS).

"While this might be Lauren's first year directing our offense, she came in with great experience playing in big matches," Schmidt said. "She is athletic and savvy, a dangerous combination for a setter.  She consistently gives her hitters great balls and puts them in positions to be successful.  On top of that, she is a terrific defender (averaging almost 3 digs/set). Lauren is a steady leader on the court and that translates into a team that is mentally tough."

VanderStoep is a junior outside hitter from Holland (West Ottawa HS).