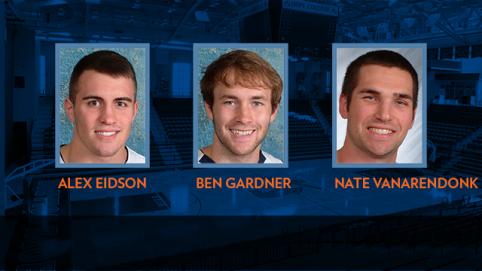 Three Hope College men’s basketball players have been recognized for their performances during Michigan Intercollegiate Athletic Association play in 2014.

Twelve players were honored in total: six on the first team and six on the second.

The three Hope players helped the Flying Dutchmen win the MIAA regular-season championship this season with a 13-1 league record.

“We are so excited for the individual recognition of each of our players: Nate, Alex and Ben,” Hope coach Matt Neil said. “The recognition occurs not only of their terrific efforts, but the effort of our entire team. Our season has been one of growth and these three have matured into major roles on a successful team. We are happy for the players, their families and our entire program.”

VanArendonk recorded 10.4 points, a team-best 5.9 rebounds and 1.8 blocks per shots per league game. He shot 70.6 percent from the field.