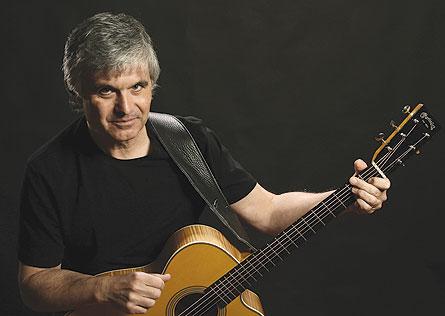 Hope College will feature Grammy-winning guitarist Laurence Juber on Thursday, Oct. 23, at 7:30 p.m. at the Knickerbocker Theatre in downtown Holland.

Internationally recognized as lead guitarist in Beatle Paul McCartney’s band “Wings,” Juber has since established himself as a world-renowned guitar virtuoso, composer and arranger. Fusing folk, jazz and pop styles, Juber is a two-time Grammy-winner that creates a multifaceted performance that belies the use of only one acoustic guitar.

“Juber is a master of acoustic finger style, but with less of the trick-guitar mishmash that seems obligatory among the high-octane pickers,” “The San Diego Reader” has said. “He has a fluid style that shifts gears through simultaneous jazzy chording, leads, and bass lines, while weaving in and out of musical thoughts faster than a Formula One racer.”

Pete Townshend, guitarist and songwriter for “The Who,” has called Juber “A master!”

Juber won his first Grammy with Paul McCartney’s “Wings,” and the second for his solo arrangement of “The Pink Panther Theme.”

He has released 22 solo albums. The latest, “Under an Indigo Sky” is a jazz/blues-tinged studio album. His concurrent release from the same label, “Catch LJ Live!,” is a two-disc combo that captures one solo concert performance on video and on CD.

As a studio musician, he can be heard on recordings from artists as diverse as Seal, Al Stewart, Ringo Starr, The Alan Parsons Project and Barry Manilow, plus he is featured on the soundtracks of hundreds of movies and television shows.

Individual tickets for the performance are $10 for regular admission, $7 for senior citizens, and $5 for children 18 and under.