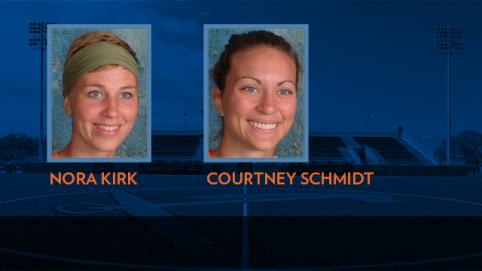 Kirk was a key part of Hope’s offense as the MIAA champion Flying Dutch closed out conference play with two victories.

The senior from Maumee, Ohio (Toledo Notre Dame Academy), scored her ninth goal of the season in a 2-0 victory over Calvin on Monday and had five shots on goal for the week.

Kirk is being honored as MIAA Player of the Week for the first time this season and the third time in her career.

Schmidt led a Hope backline that allowed only one goal in two conference victories.

The senior from Lowell, Michigan (Lowell HS), helped the Flying Dutch limit Kalamazoo to six shots in 2-1 win over the Hornets that clinched an outright MIAA championship, and 10 shots without a goal in a 2-0 victory over Calvin.

Schmidt is being honored as MIAA Player of the Week for the first time this season and the second time in her career.

Hope returns to action on Thursday, Nov. 6, when the top-seeded Flying Dutch host fourth-seeded Albion in the semifinals of the MIAA Tournament. Kickoff is 6 p.m. at Van Andel Soccer Stadium.