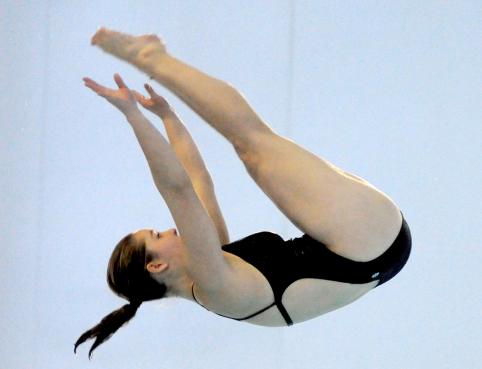 The Hope College women’s swimming & diving team made a late decision to switch Molly Meyer’s spot in the 400-yard medley relay, and it paid off in a big way.

The sophomore from South Bend, Indiana (John Adams), set Michigan Intercollegiate Athletic Association and school records in the 100 backstroke while leading the 400 medley relay to a first-place time of 3 minutes, 51.80 seconds.

The relay finish helped the Flying Dutch take the lead in the six-team meet with 262 points. Hope leads second-place Kalamazoo by eight points and third-place Calvin by nine.

The MIAA Championships resume at Holland Community Aquatic Center on Friday at 10 a.m. with preliminaries.

“We were trying to get a big lead,” Hope coach John Patnott said of the strategy for the 400 medley relay, Thursday’s final event. “We were thinking if we could get the lead, we could hold it. Molly is our best flier and best backstroker. Our freshman, Chloe Palajac, did a great job in Molly’s place. That gave us a big lead. They had to chase us.”

It also eclipsed the old school record of 56.67 belonging to Susan Looman from 1994.

“I wanted to get that record off for several years. It’s just too old,” Patnott said. “Records are nice. They deserve to be broken sometimes.”

The Flying Dutch finished second, third and eighth in the 500 freestyle.

Junior Lindsay Wiederhold of Plainwell, Michigan (Plainwell HS) placed runner-up with a time of 5:05.90. Palajac came in third at 5:10.97, while junior Virginia Cotterall of Spring Lake, Michigan (Spring Lake HS), was eighth in 5:23.07.

Northuis finished fifth in the 50-yard freestyle final at 24.58.