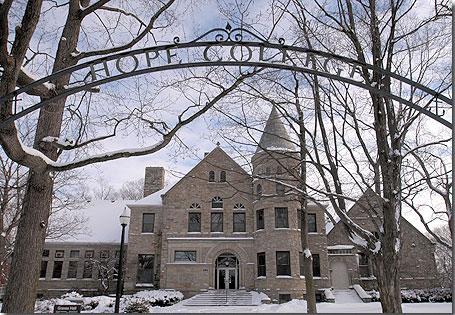 Dr. Cherry A. Murray, a nationally acclaimed physicist and engineer at Harvard University who is actively engaged in discussions of U.S. energy policy, will present “The Electricity Grid” on Friday, March 6, at 3 p.m. in Winants Auditorium of Graves Hall as the 2015 Gentile Interdisciplinary Lecturer at Hope College.

Murray, who will focus on energy use in the U.S. and the transformation of the electric grid, is a member of the U.S. Secretary of Energy Advisory Board (SEAB) and serves on the Commission to Review the Effectiveness of the National Energy Laboratories.  She is also a 2014 recipient of the National Medal of Technology and Innovation, as well as a past president of the American Physical Society and former dean of the Harvard School of Engineering and Applied Sciences.

While on campus, she will also trace her career arc through the presentation “Life in the Fast Lane” on Thursday, March 5, at 7:30 p.m. in the Maas Center auditorium.  The address will follow her path from her beginnings as a budding artist to an engineering dean, through having spent time in research, managing research and development in industry, managing a major leadership change at a national lab and then building the newest school at Harvard University.

Murray’s visit is made possible by a gift to the lectureship earlier this year from the Kavli Foundation of Oxnard, California.  Established in 2005, the lectureship brings nationally recognized scientists to campus for a major address as well as additional interaction with students and faculty—a mission enhanced by the Kavli Foundation gift, Hope dean James Gentile noted.

“Students gain tremendously from the opportunity to meet with top scientists who are at the leading edge of their disciplines nationally and internationally,” said Gentile, who is dean for the natural and applied sciences and professor of biology at Hope and was formerly president of Research Corporation for Science Advancement (RCSA) of Tucson, Arizona.  “Dr. Murray is a long-time friend and colleague of mine.  She was a member of my science advisory board at Research Corporation and we served jointly on NAS committees, including the recent Science Convergence Committee.  I am thrilled to have her visiting with us this year, and we are grateful to the Kavli Foundation for the generous support that has enabled us to provide an even stronger lectureship program.”

The lectureship was established in Gentile’s honor in 2005 by faculty colleagues, former students and friends in recognition of his long-time service to Hope when he left the college to serve as president of RCSA.  Gentile had joined the Hope biology faculty in 1976, and had served as dean for the natural and applied sciences since 1988.  He retired from Research Corporation in 2013.

She was named a recipient of the National Medal of Technology and Innovation by the White House in October.  One of the nation’s highest honors for achievement and leadership in the advancement of science and technology, the awards recognize leaders who have made lasting contributions to America’s competitiveness and quality of life and who have helped strengthen the nation’s technological work force.

Before joining Lawrence Livermore in 2004, Murray had a long and distinguished career at the famed Bell Laboratories, home to creative researchers who went on to win numerous Nobel Prizes, garner tens of thousands of patents, and invent revolutionary technologies such as the laser and the transistor. She was hired into Bell in 1978 as a staff scientist, marking the beginning of a career that culminated in her position as senior vice president for physical sciences and wireless research.

Murray was elected to the National Academy of Sciences in 1999, to the American Academy of Arts and Sciences in 2001, and to the National Academy of Engineering in 2002. She has served on more than 80 national and international scientific advisory committees, governing boards, and National Research Council (NRC) panels, including chairing the Division of Engineering and Physical Science of the NRC, and serving on the visiting committee for Harvard’s Department of Physics from 1993 to 2004.

A celebrated experimentalist, Murray is well-known for her scientific accomplishments using light scattering, an experimental technique where photons are fired at a target of interest. Scientists can then gather insights into surface physics and photonic behavior by analyzing the spray of photons in various directions from such collisions.

She is also a leader in the study of soft condensed matter and complex fluids, hybrid materials that show properties of different phases of matter. The control of suspensions, foams, and emulsions has application for the development of everything from novel drug delivery systems to “lab-on-a-chip” devices.

Among other diverse topics in condensed matter physics, Murray has studied semiconductors’ optical phenomena, nanostructures, phase transitions, and controlled self-assembly of optical materials — all critical for the advancement of quantum optics, engineered semiconductors, and tools such as optical tweezers.

Born in Fort Riley, Kansas, and the daughter of a diplomat, Murray lived in the United States, Japan, Pakistan, South Korea, and Indonesia as a child. She received her B.S. in 1973 and her Ph.D. in physics in 1978 from the Massachusetts Institute of Technology. She has published more than 70 papers in peer-reviewed journals and holds two patents in near-field optical data storage and optical display technology.

In 1989, Murray won the APS’s Maria Goeppert-Mayer Award for outstanding achievement by a woman physicist in the early years of her career, and in 2005 she was awarded APS’s George E. Pake Prize in recognition of outstanding work combining original research accomplishments with leadership and development in industry. In 2002, “Discover Magazine” named her one of the “50 Most Important Women in Science.” In 2014, she was selected by the American Association for the Advancement of Science to deliver the William D. Carey Lecture recognizing leadership in articulating public policy issues.