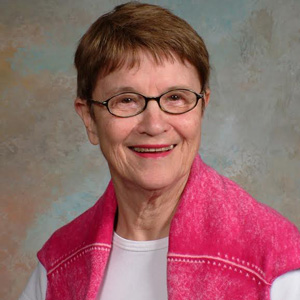 Maxine DeBruyn, who is the Dorothy Wiley DeLong Professor Emerita of Dance at Hope College, is being honored this fall for making a difference in dance education locally, regionally, nationally and internationally across a career spanning more than 50 years.

The National Dance Education Organization (NDEO) will present her with its Lifetime Achievement Award on Saturday, Oct. 10, during the group’s 17th Annual National Conference in Phoenix, Arizona.

“Maxine is a founding member of NDEO and has supported the organization for the past 17 years! We are proud to honor Maxine with our most prestigious award,” said Susan McGreevy-Nichols, NDEO’s executive director. “The criteria for this award include: impact and contributions of lifetime achievements to the field of dance education; advocacy for the field of dance and dance in education at the national and/or international level; innovativeness of contributions to the arts and dance education; and recognition by peers as an influential figure in the dance or dance education communities.”

A 1959 graduate of Michigan State University, DeBruyn pioneered the Department of Dance at Hope with a single course shortly after joining the faculty in 1965.  From that first class, the program grew into a department in 1974 and a major in 1984. The academic program has been accredited by the National Association of Schools of Dance since 1985, and among other honors is one of only 250 arts programs of all types nationwide highlighted in the book “Creative Colleges: A Guide for Student Actors, Artists, Dancers, Musicians and Writers.”  More than 320 students are enrolled in dance courses at the college at any particular time, majors and non-majors alike.

She chaired the college’s dance program from its beginning through the 2004-05 school year. In addition to being active as a teacher and choreographer, among other service she was also head cheerleading coach from 1968 to 1996, and founded and advised student groups like the Strike Time Dance Company, which specializes in bringing dance to children in grades K-6.  She has continued to teach dance classes at the college since retiring in 2006.

“Maxine has been a staple of the Hope College Dance Department since its foundation,” said Matthew Farmer, a 2004 Hope graduate and former student of DeBruyn’s who today is an assistant professor of dance and chairperson of the department at Hope. “Without her vision, inspiration, and hard work the Dance Department would not be able to enjoy the success it does today. She has touched an innumerable amount of students and artists lives through her teaching, choreographing, mentoring, and leadership.”

“Her name is synonymous with the respect and fondness not only in the Hope College dance alumni, but also through the national and international dance world,” he said. “Hope truly has been blessed to have such a world-renowned and respected individual as a founding member of one of its departments, and as a member of its faculty and community.”

DeBruyn has been actively involved in professional associations and dance education beyond campus, both within the United States and abroad.  Among other service, she is a past president of the National Dance Education Organization; past vice chair of the Michigan Council for Arts and Cultural Affairs; past president of the Midwest District of the American Alliance for Health, Physical Education, Recreation and Dance; past director of the National Association of Schools of Dance; past member of the Advisory Board of Dance and the Child International (daCi); and past member of the Counseil International de la Danse, UNESCO, Paris. She has been the coordinator for Cecchetti Council for America International Summer School at Hope College since 1994.

She has received numerous honors for her extensive involvement in dance education. She received multiple service awards through the years from the Midwest District of the AAHPERD; a service and leadership award from AAHPERD in 1987; and the "Honor Award" from Michigan Association of Health, Physical Education, Recreation and Dance in 2000. She received a Presidential Citation from the National Dance Association for dance assessment in 1992. In 1989, her work in the arts was cited in the U.S. Congressional Record and in a Joint Concurrent Resolution from the State of Michigan Legislature. In October 2004, she received a Lifetime Achievement Award from the Michigan Dance Council in cooperation with the National Dance Education Organization. For her community impact, she received the Resthaven Good Shepherd Award in 2011, honored as “a leader in senior wellness throughout the Holland/Zeeland, Michigan community.”

DeBruyn was named to the college’s DeLong Professorship in 2002.  She received the college’s Ruth and John Reed Faculty Achievement Award in 2001, and was honored by the Alumni H-Club at Hope in 1985 and 1996.

The National Dance Education Organization (NDEO) is a non-profit organization dedicated to the advancement and promotion of high quality education in the art of dance. NDEO provides the dance artist, educator and administrator a network of resources and support, a base for advocacy, and access to programs that focus on the importance of dance in the human experience.

NDEO forges alliances with more than 150 federal and state agencies and arts and education associations to support quality dance education at local, state, and national levels in the United States and with our friends in international communities.