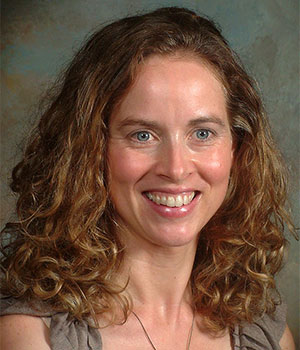 Dr. Anne Heath, associate professor of art and art history at Hope College, has been appointed director of the college’s Andrew W. Mellon Foundation Scholars Program in the Arts and Humanities.

Heath, who has been the program’s associate director for the past two years, succeeds founding director Dr. William Pannapacker of the English faculty, who will continue to teach at the college.  The change will take place at the end of the current school year.

“We’re delighted that Anne is leading the Mellon Scholars Program.  Her years of active involvement in the program and commitment to engaging students in cross-disciplinary research experiences make her an outstanding leader as we continue to cultivate coursework and collaboration for the program across campus,” said Dr. Patrice Rankine, who is dean for arts and humanities and a professor of Classics.

“At the same time, it is impossible to replace someone like Bill Pannapacker,” he said.  “Bill’s vision for and implementation of the program provided a timely boost to faculty/student collaborative research in the arts and humanities. His work spotlighted Hope College as a national leader in digital liberal arts.”

Hope is a pioneer in the digital liberal arts, and the Mellon Scholars Program, which began in 2010, is among the most established such programs in the country.  The approach has since been emulated by a large number of other institutions.

Building on the college’s long-standing tradition in the natural and applied sciences, the Mellon Scholars Program integrates technology, experiential education and faculty-student collaborative research in the arts and humanities.  Students in the program take coursework and conduct research in areas of scholarly interest mentored by faculty mentors from a variety of academic disciplines, with a particular emphasis on teaching the students how to use new and emerging digital technologies in pursuing and sharing their work.  Students join as sophomores, continuing through their junior and senior years.  The program has been supported through two grants of $200,000 and $500,000 from the Andrew W. Mellon Foundation.

Through the years, Mellon Scholars have made nearly 200 conference presentations and earned external honors for their research including multiple selections for the national Posters on the Hill event sponsored by the Council on Undergraduate Research and first place in the Student Poster Competition held in conjunction with the Network Detroit Digital Humanities Conference.  A total of 125 students have participated since the program began, individually mentored by about 70 members of the faculty.

A member of the Hope faculty since 2007, Heath has been involved with the Mellon Scholars Program as a faculty mentor since the program’s creation, and also teaches IDS 180, the “Sophomore Research Seminar,” with the program’s digital liberal arts fellow.

Heath comes to the Mellon program with a variety of leadership and collaborative experiences.  Beyond her work in the program, she served as the director of the gallery of the De Pree Art Center and Gallery from 2007 to 2012.  She teaches art history courses, primarily in the periods before modern art, including seminars in which students curated exhibitions for the gallery of the De Pree Art Center and Gallery, such as “Reading between the Lines: the History and Production of Books Highlighted by the Hope College Rare Book Collection.” She has also recently started an interdisciplinary and multi-staged collaboration with Hope students reconstructing the architecture, decoration and music of Auxerre, France, and its churches through 3D modeling, recordings, drawings and interactive maps.  This summer, she and Mellon Scholar Jonathan Bading will collaborate on reconstructing the artistic environment of La Trinité abbey in Vendôme, France.

She has received numerous grants and awards for her research and teaching, which have enabled her to travel in the United States and abroad to conduct her research.  Her publications focus on the cultural, artistic and spatial dynamics of architecture and urban space in medieval cities.  Currently, she is working on a book-length study of the visual and performance culture of Benedictine monasticism in the late Middle Ages.

Heath received her B.A. with honors in art history and German from the University of Maine, spending her junior year as a full-time student at the Universität Salzburg, Austria. She received her master’s degree from Florida State University and her Ph.D. from Brown University. During her graduate studies, Heath worked on archaeological excavations in Italy and France, and was supported by the Samuel H. Kress Foundation and the Graham Foundation for Advanced Studies for her archival and fieldwork work in France.

Pannapacker, who is the DuMez Professor of English at the college and holds his master’s and doctorate from Harvard, wrote the two successful proposals that led to the funding from the Andrew W. Mellon Foundation.  He coined the term “digital liberal arts” in February 2013 in the Chronicle of Higher Education, where he is a regular columnist and has written numerous times about the use of digital technology in the arts and humanities.

He has been active regionally and internationally in promoting the digital liberal arts, including in Canada, England and Morocco.  He is the past director of the GLCA (Great Lakes Colleges Association) Digital Liberal Arts Initiative, and a past member of the Digital Humanities Council of the National Institute for Technology in Liberal Education (NITLE) and the American Council of Learned Societies’ Digital Extension Grants Committee, among others.  In addition to writing in publications such as the Chronicle of Higher Education, he has also made numerous presentations, many times as keynote speaker, at professional meetings regarding the use of digital technology in teaching and faculty-student collaborative research.  He has also been a consultant for the creation and implementation of similar programs.

More information about the Mellon Scholars Program is available here.