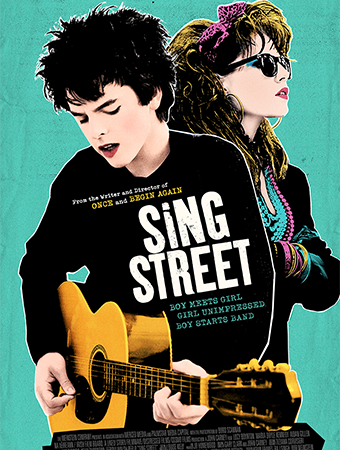 “Sing Street” inspired by writer/director John Carney’s life and love for music, and tells the story of a 14-year-old named Cosmo growing up in 1980s Dublin who must break free of a home strained by his parents’ relationship and money troubles, deal with his drop-out older brother’s antics, and survive a new public school where the kids are rough and the teachers are tougher. In order to impress a girl, Cosmo writes a song, forms a scrappy band with some school mates, and shoots some music videos. How to shoot pop videos in a recession-ridden country? Beg, borrow and steal. And steal.

The Washington Post has said that the film “is a feel-good movie that never demands to be liked. Instead it asks, politely and irresistibly.”  The Guardian has likewise praised “Sing Street,” noting, “When it comes to capturing the strange, romantic magic of making music, few modern film-makers are more on the money than John Carney.”

The film is rated PG-13 and is in English.

Following “Sing Street,” the Knickerbocker Theatre will launch into its One-Night Only Series in August with Marilyn Monroe and James Bond films.  The Monroe series will include classics like “The Seven Year Itch,” and the Bond series will bring “Goldfinger” back to the big screen. The theatre will also show Free Family Films in June and July.

Information on all the films can be found at the Knickerbocker’s website.

Tickets for the individual films are $7 for regular admission, and $6 for senior citizens, Hope College faculty and staff, and children.  Tickets will be sold at the door but are also available in advance at the Events and Conferences Office located downtown in the Anderson-Werkman Financial Center (100 E. Eighth St.). The office is open weekdays from 9 a.m. to 5 p.m. and can be called at (616) 395-7890.