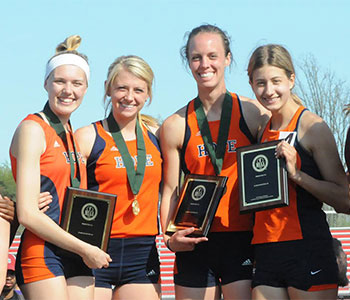 The Flying Dutch won five events at the annual league championship at Olivet en route to a runner-up finish in the team standings. Hope totaled 178.5 points — second only to Calvin’s 268.5.

Satkiewicz became the seventh Flying Dutch runner to be MIAA champ in the 400 meters. She posted a time of 57.55 seconds.

Webb clocked a winning time in the 800 meters of 2:14.84. She is the ninth different Flying Dutch runner to earn a MIAA title in the event. Hope has won the event a total of 12 times.

Senior Erin Herrmann of Wheaton, Illinois (Wheaton-Warrenville North HS) ran away with the 3,000-meter steeplechase title repeat. She recorded a MIAA-record time of 10:44.31 that was a minute faster than the nearest competitor. Herrmann is the only Hope runner to win the event.

Pearson heaved a winning javelin toss of 38.57 meters (126-6) for a title repeat. It is the ninth a Hope female athlete has won the event.

Junior Sierra Schultz of Kellogg, Iowa (Grinnell Community HS) placed third in the 400 hurdles at 1:05.55 and was followed by Rich in fourth at 1:07.78 and freshman Allison VanderStoep of Holland, Michigan (West Ottawa HS) in eighth at 1:10.46.

Hope came in fourth in the 4x100 relay. Sophomore Rachel Anderson of Muskegon, Michigan (Mona Shores HS), Satkiewicz, Schultz and Pearson had a time of 50.37 seconds.

Freshman Jessica Korte of Washington, Michigan (Cairo American HS) was seventh in the 400 at 1:02.70.