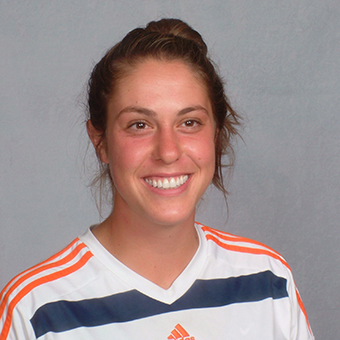 Elizabeth Perkins cherishes both Hope College and the Hope College Women’s Soccer program so much that she happily shares any recognition she receives with them.

The senior from Eaton Rapids, Michigan (Lansing Christian HS) has another honor to add to her growing list of achievements. She has been named a College Sports Information Director of America NCAA Division III Women’s Soccer First Team Academic All-American for the 2016 season.

“I’m really happy to represent Hope and Hope Women’s Soccer,” said Perkins, the first Hope women’s soccer player to be named CoSIDA Academic All-American. “Hope and Hope Women’s Soccer have given me so much and so many opportunities. I’m flattered, and honored, to be able to give back any way I can. This award is a testament to Hope College, in general, and the ways Hope Athletics tries to develop well-rounded human beings and puts a premium on high scholastic performance, not just athletic performance.”

Perkins was voted an Academic All-American by sports information directors across the country after receiving academic all-district honors. She was nominated for the award by Hope Sports Information Director Alan Babbitt.

Perkins is recognized for her success on the soccer field and in the classroom. She carries 3.98 grade point average through her junior year while pursuing a double major of psychology and Spanish and a minor in French.

Perkins was named Michigan Intercollegiate Athletic Association MVP this season after leading the Flying Dutch to a share of the regular-season championship, a MIAA tournament title and the fifth NCAA Tournament appearance in team history. Hope finished with a 15-4-2 overall record.

Perkins is a two-sport athlete who also is a key contributor as a forward for the nationally ranked women’s basketball team.

Leigh Sears, Hope women’s soccer coach, called Perkins an amazing example of what a Division III athlete can be.

“She not only excels on the field, but in the classroom as well,” Sears said. “The team knows its ultimate purpose here is to be a student first, and Elizabeth has worked just as hard academically as she does on the field or the court.

“I am very excited for both Elizabeth as well as our program.  We work very hard to do things the right way and her being the first player in our program to receive this award is very exciting for all of us.”