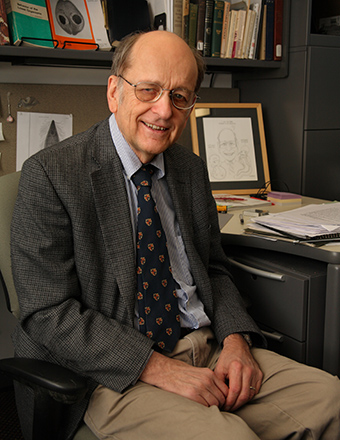 Dr. Donald Cronkite of Holland, a retired member of the biology faculty who was acclaimed both on campus and nationally for his excellence as a teacher, died on Wednesday, March 15, 2017, after many years of living with Parkinson’s disease. He was 72.

He taught at Hope for 32 years, from 1978 until retiring in 2010 as a professor emeritus of biology.  His teaching interests included introductory biology, embryology, cell biology, genetics, the history of biology, evolutionary biology, and science and human values.

In 2008, he received the “Honorary Membership Award” from the National Association of Biology Teachers (NABT), the association’s highest honor, for his distinguished teaching and service in the biological sciences.  The NABT had previously awarded him its 2006 “Evolution Education Award” and its 1995 “Four-Year College Biology Teaching Award.”

In March of 2005, he was named the “College Teacher of the Year” by the Michigan Science Teachers Association. In 1991, he was one of only 700 faculty members recognized nationally with a 1990-91 Sears-Roebuck Foundation Teaching Excellence and Campus Leadership Award.

Read more on Dr. Cronkite in the February 1989 issue of News from Hope College

He also received recognition from the Hope community. In 1988, he was named a co-recipient of the Hope Outstanding Professor Educator (H.O.P.E.) Award by the senior class and served as Commencement speaker.

He founded the college’s A.J. Memorial Peace Lecture series in 1985 and chaired the event’s coordinating committee for more than 20 years, and served on numerous other Hope boards and committees including the Campus Life Board, Religious Life Committee, Student Life Committee and Library Planning Committee. He was also a faculty representative to the college’s Board of Trustees.

Among other service to Hope, he portrayed several historical figures in the “Rendezvous with History” program; created the “Ask the Egret” newsletter that began as a question-and-answer resource for beginning biology at Hope but—having gained a following because of his wit—expanded to take questions of all sorts; and was active on campus in presenting workshops for his colleagues regarding the use of technology in teaching.  He also directed pre-college outreach programs at Hope which were funded by the Howard Hughes Medical Institute, including a sixth/seventh-grade science recreation program, a seventh/eighth-grade science demonstrators program and a ninth/10th-grade research club.

His numerous contributions to teaching excellence beyond campus included serving as academic director for the Woodrow Wilson National Fellowship Foundation National Leadership Institute for High School Biology Teachers at Princeton, University from 1991 to 1997 and a science curriculum consultant to 21 different colleges. With help from the National Science Foundation, he was involved in forming high school-college partnerships to enhance science education at the secondary level.

Cronkite’s publications included the books “A Problem-Based Guide to Basic Genetics,” “Genetics and Cell Biology,” and “A Guide to ‘Asking About Life, 2nd edition’ for Teachers and T.A.s.”  He also had several research articles published in scientific journals, most notably regarding his paramecium research, and book reviews and essays in multiple publications, including The Church Herald, Perspectives: A Journal of Reformed Thought and The Reformed Journal.

Cronkite was a past member of a multidisciplinary committee formed by the National Council of Churches to lead the U.S. ecumenical community’s work on issues of human genetic technology.  For several years, he was moderator of the Christian Action Commission of the Reformed Church in America, the college’s parent denomination.  He had also been an elder and vice president of the Consistory at First United Presbyterian Church in Redlands, California, and Third Reformed Church in Holland.

He was a member of Phi Beta Kappa and an Eagle Scout, and belonged to the Order of the Arrow.  He held his bachelor’s degree and his doctorate, both in zoology, from Indiana University at Bloomington.

He was the child of Altha and Charles “Ted” Cronkite of Colorado Springs, Colorado.  He is survived by his wife, Jane, of Holland; son Ethan, daughter-in-law Amy, and grandchildren Ramona and Henry, of Oak Park, Michigan; son Joel, of Holland; and daughter Emily, son-in law Michael Coronado and grandchild Lucy, of Belmont, California.

Funeral services will be held Tuesday, March 21, at 7 p.m., at Third Reformed Church, 111 W. 13th St. in Holland. Visitation is scheduled for Monday, March 20, from 4 p.m. to 7 p.m., at the Langeland-Sterenberg Funeral Home, 315 E. 16th St. in Holland. Memorial donations may be made to the A.J. Muste Lecture Fund at Hope College, or to the Michael J. Fox Foundation for Parkinson’s Research.