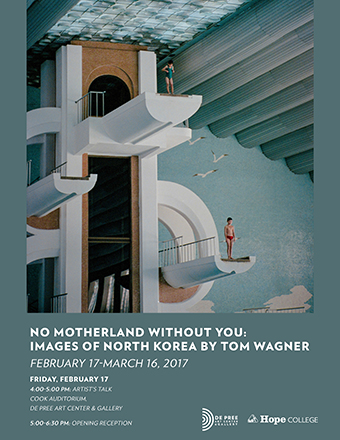 The De Pree Art Center and Gallery at Hope College will feature “No Motherland without You: Images of North Korea,” an exhibition of photography by Hope graduate Tom Wagner, from Friday, Feb. 17, through Thursday, March 16.

Wagner will deliver an artist’s talk on Friday, Feb. 17, at 4 p.m. in Cook Auditorium in the De Pree Art Center and Gallery, with a reception following from 5 p.m. to 6:30 p.m.

The public is invited to the exhibition, artist’s talk and reception.  Admission is free.

The exhibition features photographs that Wagner took in North Korea during four visits between the mid-1990s and early 2000s.  The work presents North Korea as a place of looking, of guessing, of watching and of being watched.

Questions of propaganda and what is knowable are at the center of Wagner’s documentary projects. His photographs explore the impact of place and time on his subjects, not seeking answers but an entrance for viewers to create their own narratives and seek answers to questions they find within.

“[I’ve also been interested in] the contrast between the propaganda of what one wants to portray about a place and the cracks in the background,” he said.

“It all becomes an opportunity for one to explore what you think of different places,” Wagner said.

The title of the show, “No Motherland without You” is a popular North Korean song.  The song is also called “Ode to Kim Jong-il,” and is about the country’s former leader, Kim Jong-il, who died in 2011.

The exhibition will feature about 40 images, including six large-scale prints whose reproduction and mounting was donated by 40 Visuals of Spring Lake, as well as supporting narrative materials.  Wagner has selected the photographs from the 4,000 to 5,000 that he estimates he took during his four visits to North Korea.

Wagner is an award-winning photographer who has worked globally for magazines and Fortune 500 corporations in portraiture, news, and stories covering people and events ranging from factories to A-list celebrities, from in-depth reportage of subcultures to breaking news events.  Currently based in West Michigan, he was in Tokyo, Japan, for more than 10 years and London, England, for more than five years, and has done assignments in more than 35 countries.

His work has appeared in magazines around the world, including Time, Fortune, Bloomberg Markets, Businessweek, GEO, Der Spiegel and L’Express, and his photographic awards include Alfred Eisenstaedt and Pictures of the Year awards.  More about his work is available online at stormingthecastlepictures.com.