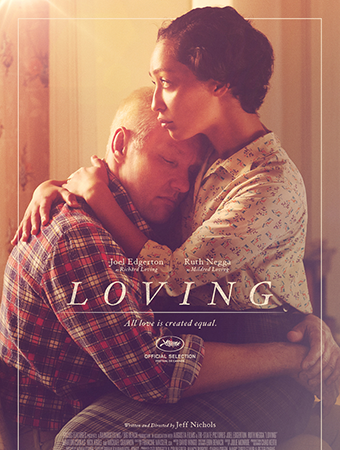 Knickerbocker Winter Film Series to Open with “Loving” on January 30

Based on a true story, “Loving” is romantic drama that depicts the challenges that face Richard and Mildred Loving, an interracial couple and the plaintiffs in the 1967 U.S. Supreme Court decision, “Loving v. Virginia.”

Manohla Dargis of The New York Times said of the film, “There are few movies that speak to the American moment as movingly—and with as much idealism—as Jeff Nichols’s ‘Loving.’” Ann Hornaday of the Washington Post said of “Loving” that “It lives up to its title as a noun and a verb, with elegant, undeniable simplicity.”

The film was written and directed by Jeff Nichols, best known for “Mud,” “Take Shelter” and “Midnight Special.”

Set in Caroline County, Virginia, the film focuses on Richard Loving, a white construction worker, and a local black woman and family friend he falls in love with, Mildred Jeter. Because of the laws against interracial marriage in Virginia at that time, Richard and Mildred go to Washington, D.C., to get married before returning to their hometown to start their life together as a married couple. “Loving” celebrates the real-life courage and commitment of Richard and Mildred as an interracial couple, who spent the nine years following their wedding fighting for the right to live as a family in their hometown.

Tickets for the individual films are $7 for regular admission and $6 for senior citizens, Hope College faculty and children. Tickets will be sold at the door but are also available in advance at the Events and Conferences Office located downtown in the Anderson-Werkman Financial Center (100 E. Eighth St.). The office is open weekdays from 9 a.m. to 5 p.m. and can be called at (616) 395-7890.

The Knickerbocker Theatre is located in downtown Holland at 86 E. Eighth St