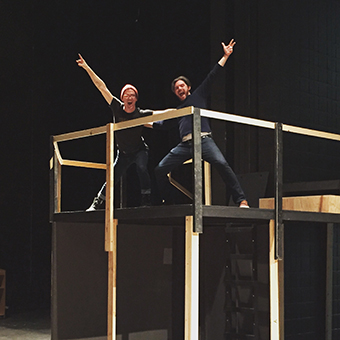 The Hope College Department of Theatre’s final production of the year, “The Line Between”, has been an exciting collaboration between current Hope students and alumni Daniel Kwiatkowski ’04 and Erik Saxvik ’04 to create an original devised play.

Kwiatkowski and Saxvik developed “The Line Between” following two workshops with the Hope students in the fall of 2016 and creating writing prompts, gathering visual images, story ideas, and original music from the students.   The rehearsal process began in February and eventually yielded the storyline, songs, action and script for the production.

“It has been an exciting and deeply meaningful opportunity to devise an original piece of theatre with the Hope students,” Saxvik said.  “Being able to return to the Hope community, which was invaluably inspiring to me as a student, to create a work that can generate discussion within the community is a great privilege. The show has been a genuine group effort from the very beginning, from deciding what subject matter we wanted to address to writing the script itself.”

Kwiatkowski concurred. “The process has truly proved to be challenging (physically, mentally and emotionally) and therefore it has proved to be overwhelmingly rewarding and honest,” he said.  As the themes of production unfold, he noted, “…we have tried to unmask and unravel the idea of what it means to be different and the lines put it place to keep "other people" out. We have had to, and continue to, question our own privilege here at Hope and how we use that to empower those who struggle to have their voice heard.”

Daniel Kwiatkowski has been a practicing artist and stage technician/carpenter in New York for the past 11 years. Originally from Cheboygan, and with a Bachelor of Arts degree in theatre from Hope, he now calls Brooklyn, New York, home. Upon arriving in New York, he was a founding member and contributing writer and performer with semi:theater. In 2008, he was an artist-in-residence with Mabou Mines, where his first play, “THIRST,” debuted. In 2012, he was a fellowship winner with the Anna Mahler Foundation for playwriting and spent three weeks in Spoleto, Italy, writing the piece, “The Carpenter.” His third play, “Bed,” had its first public reading with Kathleen Chalfant produced by Royal Family Productions, and in 2014 he had the great pleasure of Scoring Royal Family’s U.S. premiere of “Four Last Things” by Lisa Tierney-Keogh.

As a carpenter, Kwiatkowski has built scenery and props for more than a hundred shows in New York City, ranging from Broadway to off- off-Broadway and everything in between. In 2015, he took over as props master for Robert Wilson’s “Einstein on the Beach” and had the good fortune of traveling to Gwang Ju, South Korea, with the show. He is a proud member of Pink Sparrow Scenic out of Greenpoint, Brooklyn, which builds scenery for Google, Ted Talks, The US Open, NYC Fashion Week, MTV, SYFY and dozens of other clients.

Erik Saxvik is a theatre artist and musician originally from the Chicagoland area, who has called New York City home for the past eight years. After graduating from Hope, he received his MFA in acting from the American Conservatory Theatre in San Francisco.  Beyond writing songs for his band, he has also composed for theatre; most notably the “Ash Tree Spinners” by Liz Thaler (Amios). His favorite acting credits include Sean Cullen’s “Safe Home” (Royal Family Prod. / CAP21), “To the Oars” (semi:theatre) and the West Coast premiere of Sarah Ruhl’s “Orlando” (A.C.T.).

Both Kwiatkowski and Saxvik are founding members of the folk/roots/rock band, The Hollows. The band features two other Hope alumni, Jeffrey Kurtze ’05 and David Paarlberg ’07.  The other band members are Justin Aaronson and Rob Morrison.“The Line Between” is funded in part with a generous grant from the Hope College Patrons for the Arts.

Tickets for the production are $10 for regular admission, and $7 for senior citizens, Hope faculty and staff. Tickets are free for Hope College students and children 18 and under, and are available at the Events and Conferences Office located downtown in the Anderson-Werkman Financial Center (100 E. Eighth Street). The office is open weekdays from 9 a.m. to 5 p.m. and can be called at (616) 395-7890, although the office will be closed on Friday, April 14, because of the Good Friday holiday. Patrons may purchase tickets in person, online or by calling the ticket office.