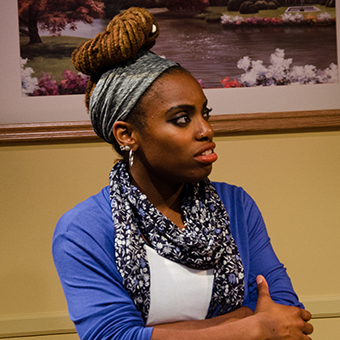 A 2014 graduate of Forest Hills Northern High School, Smith is dual-majoring in English with a writing emphasis and theatre.  She has performed or participated on the crew of Hope theatre productions throughout her four years at the college.

As announced in March, the college’s Department of Theatre and theatre students received a variety of other honors during the national festival.

The department’s production of “The Line Between,” which was created at the college by a team of Hope theatre students and guest-artist alumni, was the 2018 national honoree as the “Outstanding Production of a Devised or Company-Generated Work.”  It was also among the national runners-up in two other categories, “Distinguished Performance and Production Ensemble,” and “Distinguished Director of a New Work.”  Michelle Bombe, who is a professor of theatre and director of theatre at Hope, accepted the plaque recognizing the production.

Junior Rachel Dion of Clinton Township participated in the Aspire Arts Leadership Fellows Program during the festival as the winner of Region III’s award for the program.  Sophomore Emmie Sandstedt of Lake Zurich, Illinois, participated in the national festival’s Stage Management program as recipient of Region III’s fellowship for the program.  Dion, Hill, Sandstedt and Smith were among only 125 students nationwide invited to attend the national festival.

The KCACTF is a national program designed to encourage excellence in college and university theater in the United States.  Started in 1969, the program involves 20,000 students from more than 700 academic institutions throughout the country.  Region III includes colleges and universities from Illinois, Indiana, Michigan and Wisconsin.