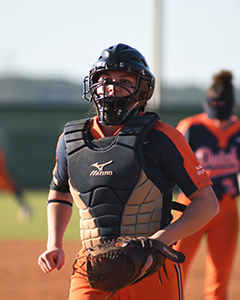 A catcher, Reitsma is one of 15 first-team selections in the Central Region. The senior from Grand Rapids, Michigan (Grand Rapids Christian HS) is one of three at-large honorees.

A pitcher, Jones is one of 15 second-team selections. The senior from South Lyon, Michigan (East) is one of two pitchers on the second team.

Both Reitsma and Jones contributed to Hope’s success this season, including a 33-10 overall record heading into this weekend’s NCAA Super Regional hosted by the Flying Dutch at Wolters Stadium.

Reitsma is batting .406 while starting all 43 games behind the plate. She leads the Flying Dutch with a single-season, school-record 13 home runs and 48 runs scored. She is second with a career-high 43 RBIs.

WIth a 24-game hit streak that ended in Monday’s regional championship round, Reitsma equaled Carrie Scott’s 1999 school record for hits in consecutive games.

Reitsma caught for a pitching staff that posted a 1.94 ERA and 14 shutouts. She also threw out 13 baserunners at a 37.1 percent clip.

Jones surpassed her own school record for wins in a season with a 20-5 overall record. She made 26 appearances, including 24 starts. She also recorded one save in relief.

The righthander currently has a 1.36 ERA that includes 21 complete games and 227 strikeouts in 159 ⅔ innings. She needs two strikeouts at the super regional to match her school record for most strikeouts in a single season.

Jones has nine shutouts on the season. Opponents are batting .182 against her.