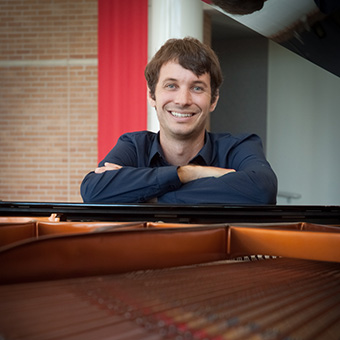 Dr. Benjamin Krause of the Hope College music faculty has been named the 2018 Distinguished Composer of the Year by the Music Teachers National Association (MTNA).

The award is conferred upon the composer of the most significant composition from among all works commissioned by the MTNA state affiliates.  There were 28 submissions this year.  Krause was selected for his work “Taxonomies of Pulse,” which premiered in October at the Indiana Music Teachers Association State Conference in Fort Wayne.

Krause, who is a visiting assistant professor of music and teaching music theory, will receive the recognition on Sunday, March 17, during this year’s MTNA National Conference, which will be held in Spokane, Washington.  The honor includes a performance of the composition during the conference as well as a $5,000 cash prize made possible by the MTNA Foundation Fund.  In addition, “Taxonomies of Pulse” will be placed in the MTNA Commissioned Works Library.

Krause has previously had work recognized through commissions, awards, and residencies by the Copland House, Houston Symphony, Network for New Music, Oregon Community Foundation, Presser Foundation, ASCAP, Da Camera of Houston and The American Conservatory in Fontainebleau, France. His piece “Pathways” for chamber orchestra won of the Houston Symphony’s inaugural Young Composer Competition and was described as “attractive…  the composer craftily reconstituted orders of events to create a compelling dramatic arc. Krause’s excellent control of dissipating energy for the serene ending of the work was most impressive” (concertonet.com).

An artist with diverse interests, he has collaborated with photographers, dancers, architects and filmmakers in his creative work. He was a Young Artist of Da Camera (2011-12) and received the 2012 Presser Award, enabling a summer of study in Europe at the American Conservatory of Fontainebleau, where his work was awarded the Prix Marion Tournon Branly. In addition to his teaching at Hope, during the 2018-19 season he has held residencies at the Brush Creek Foundation for the Arts in Wyoming and, as a recipient of the Copland House Residency Award, at Aaron Copland's historic home in Cortlandt Manor, New York.

As a pianist, he is active in contemporary music, jazz, and the traditional classical repertoire, with performances at Carnegie Hall, Zilkha Hall (Houston), the Houston Museum of Fine Arts, the Menil Collection, and in collaboration with such artists as Molly Barth (Eighth Blackbird), Jeffrey Zeigler (the Kronos Quartet), Timothy McAllister (PRISM Saxophone Quartet), and Ronald Feldman (the Boston Symphony). In both solo performances and collaborations with many ensembles, he has premiered and performed more than 50 new works in a wide variety of venues, in addition to performing the works of major 20th and 21st century composers such as George Crumb, Louis Andriessen, John Cage, and Pierre Jalbert.

As an educator, he has designed and taught university courses in composition, orchestration, music theory, aural skills and jazz.  While a visiting assistant professor of music at Valparaiso University from 2015 to 2018, he founded and directed VUNUMU (Valparaiso University New Music Ensemble), coaching and leading performances of the work of leading contemporary composers as well as of that of student composers.  He joined the Hope faculty this past fall.