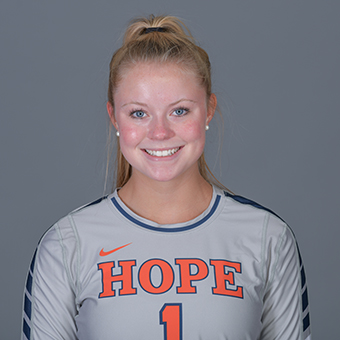 Hope College’s Ana Grunewald has been selected as the Michigan Intercollegiate Athletic Association Women’s Volleyball Athlete of the Week.

On Saturday, Grunewald started the day with five service aces to go with eight digs and eight kills in a 3-0 win over No. 8 Wittenberg (Ohio).

Then in the afternoon against Kenyon (Ohio), Grunewald tallied eight kills, four digs, three blocks, and a service ace in a 3-0 victory.

On Friday, Grunewald had a double-double of 12 kills and 11 digs in a five-set setback to DePauw (Indiana).