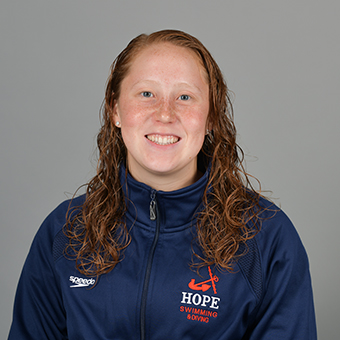 Hope College’s Emma Schaefer has been chosen as the Michigan Intercollegiate Athletic Association Women’s Swimmer of the Week.

The junior from DeWitt, Michigan (St. Johns HS) is receiving the award for the first time this season and the third time in her career.

At the Wheaton College (Illinois) Invitational on Friday, Schaefer bested her own school record, set last February, in the 200-yard individual medley by more than two tenths of a second with a time of 2:06.58 while taking second place in the event.

Later in the day, Schaefer won the 100-yard breaststroke and broke an 18-year-old school record, previously held by Betsy VandenBerg. With a time of 1:04.87, Schaefer claimed the new record by just one hundredth of a second. VandenBerg's old mark in the event was 1:04.88.

On Saturday, Schaefer placed third in the 400-yard individual medley with a time of 4:36.96.