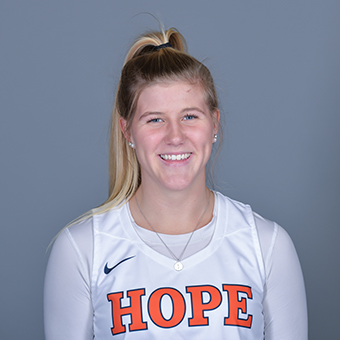 Hope College guard Sydney Muller has been selected as the Michigan Intercollegiate Athletic Association Women’s Basketball Athlete of the Week.

The junior from Grand Rapids, Michigan (Grand Rapids Christian HS) was instrumental for the Flying Dutch in taking the title at the Augustana College (Illinois) Tournament for which she was named the tournament MVP.

In Hope’s 78-48 win over Luther College (Iowa) on Friday, Muller led the Flying Dutch with 17 points on 6-of-10 shooting from the floor and 5-for-5 from the free-throw line. She also grabbed three rebounds, made three assists, gathered two steals and had no turnovers in 25 minutes of play.

On Saturday in the Flying Dutch’s 92-48 defeat of Benedictine University (Illinois), Muller again was Hope’s top scorer with 13 points on 5-of-7 shooting from the field, including going 3-for-4 from the three-point arc. She had three rebounds again as well, this time in 17 minutes of play.

This is the first time Muller has been chosen as the MIAA Player of the Week in her career.