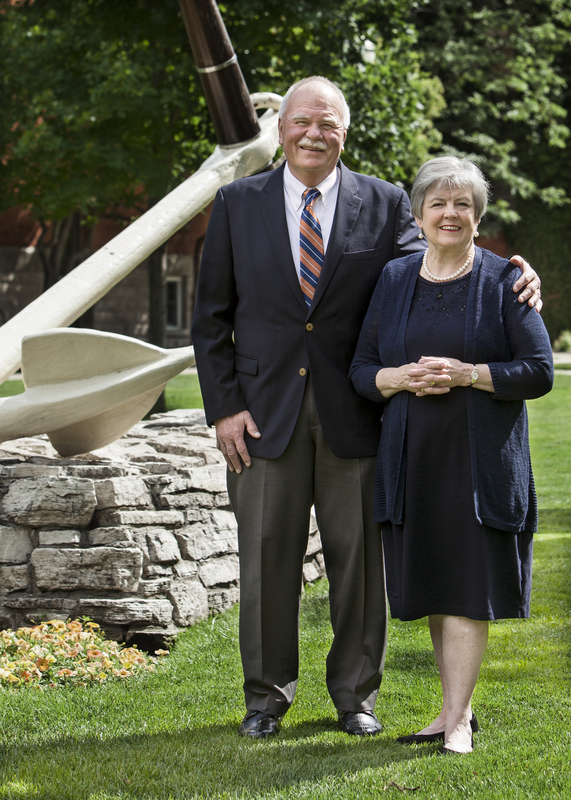 With the school year nearing its end, the Hope family took two opportunities to thank the husband-and-wife team that stepped up and stepped in to help the college in a time of transition by serving a two-year term as Hope’s first couple.

The Hope College Alumni Association surprised President Dennis Voskuil and Betty Voskuil with a Meritorious Service Award on Saturday, April 27, during the annual Alumni Banquet at the Haworth Inn and Conference Center.  A handful of days later, on Thursday, May 2, hundreds of members of the campus community filled the great room of the Jim and Martie Bultman Student Center during a reception in the Voskuils’ honor. 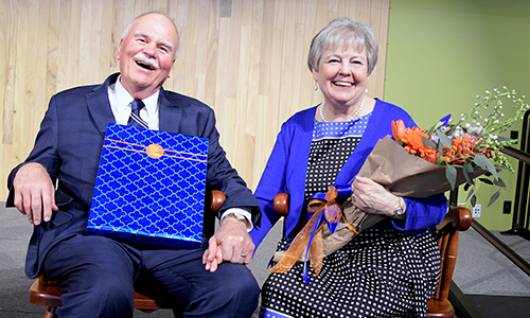 The Rev. Dr. Dennis Voskuil was appointed president in 2017 to serve while the college conducted a national search for a successor to Dr. John C. Knapp, who left to become president of Washington & Jefferson College in Pennsylvania.  Voskuil will be succeeded on July 1 by Matthew A. Scogin ’02, who was named president-elect on Dec. 7.

The Meritorious Service Award recognizes contributions to Hope and its alumni through notable personal service and long-time involvement with the college.  “They were the perfect people — at the perfect time — to guide the college through this period of transition.  And they have done so as a team; a true partnership,” said Brad Norden ’04, who is president of the Alumni Association Board of Directors and was the evening’s master of ceremonies.

Junior Chandler Alberda, who is the Alumni Board’s Junior Class Representative as well as vice president of Student Congress, presented the award.  She noted that the Voskuils have epitomized selfless commitment in answering the call to lead Hope in what rightfully could have been their retirement years.  Recalling their active involvement in the campus community, including regularly attending events for and with students, she also expressed appreciation for their role as grandparents-away-from-home for many.

A slideshow projected during the May 2 reception reflected the couple’s student focus and hospitality, whether it was hosting students at the President’s Home, Dennis dressed as St. Nicholas during Advent, or Betty joining the orientation assistants during the morning of Move-In Day.  The May 2 event included affectionate tributes to both of the Voskuils by Karl Droppers ’82, chair of the college’s Board of Trustees; Dr. Sonja Trent-Brown, who is the John H. and Jeanne M. Jacobson Professor of Psychology and the college’s chief officer for culture and inclusion; senior Jason Gomory, president of Student Congress; and senior Lydia Berkey, who is chief of culture and inclusion on the Student Congress Cabinet.

“You bring so much joy and life to Hope College, and we’re so grateful for your time here,” Berkey said.

Droppers noted that Dennis Voskuil’s presidential tenure will have an important lasting impact on Hope, especially through the addition of a chief officer for culture and inclusion as a member of the college’s leadership team and the development of Hope’s statement of Christian aspirations adopted by the Board in May 2018.  Of the latter, he said, “This is a rudder that has the ability to guide Hope for years and years, and it was under your leadership that it was done.”

Also during the event, the Voskuils were presented a photo book featuring images from the past two years, and two wooden Hitchcock chairs customized with the Hope seal.  In addition, the college unveiled the commissioned portrait of Dennis Voskuil that will be installed in the Graves Hall Presidents’ Room alongside those of his 12 predecessors and the Rev. Albertus C. Van Raalte.

The Voskuils’ most recent two years of service continue a relationship with Hope that began in 1977, when Dennis Voskuil joined the religion faculty.  He remained at the college until 1994, when he became president of Hope’s next-door neighbor, Western Theological Seminary, until retiring in 2008.  He continued to teach at the seminary as the Marvin and Jerene DeWitt Professor of Church History until 2014, when he became a senior research fellow with the college’s A.C. Van Raalte Institute.  He subsequently directed the institute from 2015 until becoming Hope’s president.

The Alumni Banquet and reception weren’t the first times that the college honored the Voskuils.  Hope had presented each of them with honorary degrees during the Baccalaureate ceremony in 2008 in recognition of their long-time and distinguished service to the Reformed Church in America.  They also co-delivered the Baccalaureate address that year.