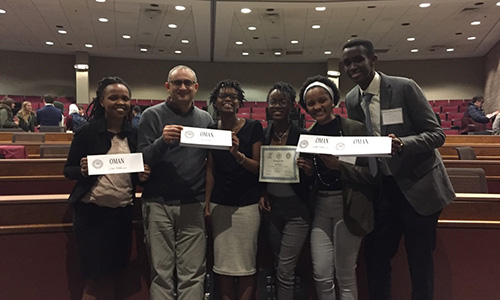 Ngoma was part of a team of five students from Hope representing the views of Oman’s Governing Council and the policy objectives of Oman during the Model Arab League (MAL).  They debated against delegates from 10 other colleges and universities in five councils:  Environmental Affairs, Joint Defense, Political Affairs, Social Affairs and Palestinian Affairs.

Ngoma chaired the Council of Arab Social Affairs Ministers.  Because of the high quality of her participation this year, she has been selected to chair the Joint Defense Council for the spring 2020 Model Arab League.

MAL is dedicated to expanding students’ knowledge and understanding of the culture, history and politics of the Middle East. The competition was sponsored by the National Council on U.S.-Arab Relations (NCUSAR) based in Washington, D.C.

The Hope students participated under the auspices of the college’s Fried Center for Global Engagement.  By participating in Hope’s MAL U.S.- Arab Relations conference, students learn about the Arab world’s political priorities and sharpen their skills in diplomacy and public speech.  Their instructor was Habeeb Awad, who is international student and scholar adviser at Hope.