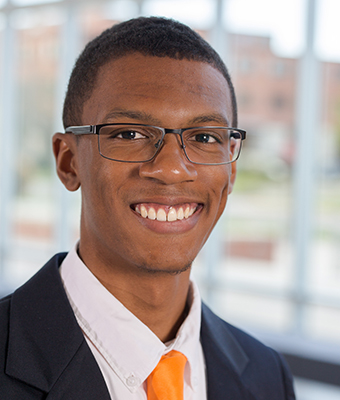 Hope College senior Brandon Fuller of Kentwood will be honored as the 2020 collegiate recipient of a Junior Giant Scholarship during the 38th annual Giants Banquet and Awards Ceremony, to be held on Saturday, Feb. 22, at the JW Marriott Grand Rapids.

Hosted by Grand Rapids Community College since 1983, the annual Giant Awards recognize African American individuals or organizations for their exceptional contributions in shaping the history and quality of life of the Grand Rapids community.  A total of 14 individuals have been announced as award recipients this year in a variety of categories, and a Giants Among Giants honoree will be named during the dinner.  Each award is named after a local person who has demonstrated excellence and serves as a perpetual memorial to those notable contributions.

“I am very proud of Brandon, as he embodies the essence of this prestigious award through his academic achievements, leadership and service to his community,” said Vanessa Greene, who is associate dean of students and director of the Center for Diversity and Inclusion at Hope, and nominated Fuller. “Brandon is a focused and dedicated learner, who leads by example. He works very hard every day to accomplish his goals and is highly respected by his peers, faculty and administrators for his commitment to excellence.”

Fuller’s scholarship is one of two Junior Giant awards for students for students of African American heritage who attend or graduated from one of the school systems served by the Kent Intermediate School District.  The other is the Cedric Ward Leadership Scholarship for a high school senior.  Each provides $1,000 for a college or technical school of the recipient’s choice.  Pulliam and Ward co-founded the Giant Awards and curated them during their tenure at GRCC.

Fuller, who is a 2016 graduate of East Kentwood High School, is majoring in economics and mathematics at Hope, where he has received both the Excellence in Principles of Economics Award and Outstanding Junior Economics Student Award.  After graduation, he plans to obtain a doctorate in economics, with the ultimate goal of working on public policy for underrepresented groups.

He was one of 30 students from a nationwide pool of applicants to receive a scholarship from the American Economics Association to attend a two-month pre-doctoral program in economics at Michigan State University in 2019, an opportunity that led to his being selected to participate in a job-shadow experience at the Federal Reserve Bank in Boston, Massachusetts.  He has also had the opportunity to attend several prestigious conferences around the country focused on economics and public policy through his involvement with the Markets & Morality student group.

He is an active member of the college’s Black Student Union, of which he has served as the trustee and treasurer. He also co-led the Men’s Enrichment Network, a Hope student organization focused on leadership, professional development, networking and community building.  His activities at the college have also included participating in summer research; the Student Appropriations Committee that allocates funding for student organizations; the Student Ambassadors program of the Alumni and Family Engagement office; the Omicron Delta Epsilon honor society in economics; and the Phelps Scholars Program, a residential academic program in which freshman students explore topics of diversity.