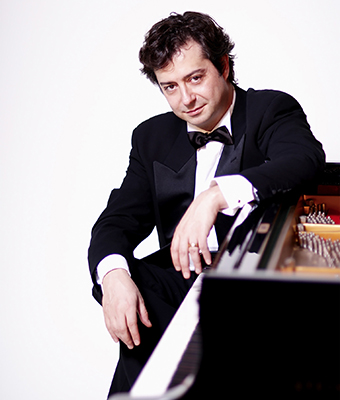 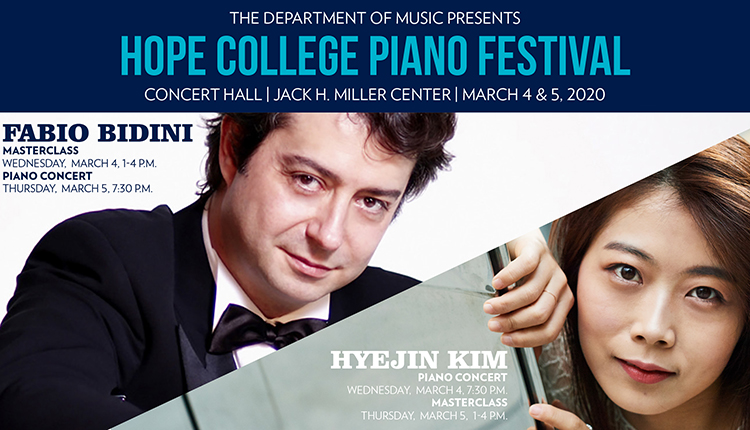 Hope College will feature concerts by two pianists on two consecutive nights, including the highly regarded Fabio Bidini on Thursday, March 5, and HyeJin Kim on Wednesday, March 4, at 7:30 p.m. in the Concert Hall of the Jack H. Miller Center for Musical Arts.

The public is invited to the concerts and master classes.  Admission is free.

Bidini, who will also be performing as part of the Trio Solisti at the Gilmore Keyboard Festival this spring, was part of the Great Performance Series in 1996.  Bernard Holland of the New York Times has said of him, “He is capable of an admirable simplicity…truly touching.”

Bidini began his piano studies at the age of five. He graduated magna cum laude from Cecilia Conservatory in Rome and studied composition at Florence Conservatory. He has been awarded first prize in 11 of Italy’s most prestigious national piano competitions and has been the recipient of the top prizes awarded in eight international competitions - Terni, Köln, Busoni 1988 and 1992, Pretoria, Marsala, London and the Van Cliburn Fort Worth. He made his North American debut in 1993 with the Atlanta Symphony. He has been a frequent guest of the most prominent orchestras worldwide, including the San Francisco Symphony, Dallas Symphony, Budapest Festival Orchestra, Chamber Orchestra of Philadelphia, Philharmonia Orchestra of London and BBC Orchestra Wales.

His discography consists of 14 CDs of leading recording companies such as BMG, Naxos, Classichord, Musikstrasse, EPR, True Sounds, among others.

Bidini is a member of the faculty of the Colburn School in Los Angeles, where in 2015 he became the first recipient of the Carol Colburn Grigor Piano Chair.  He has been professor of piano at the Hochschule für Musik Hanns Eisler, in Berlin, one of Europe’s premiere music conservatories. He also serves as an artist-in-residence at the Hochschule für Musik und Tanz in Köln.

HyeJin Kim, an accomplished student of Bidini, will perform on March 4. Praised by critics for her “passionate… polished and expressive” performances, pianist HyeJin Kim is one of South Korea’s young classical stars. Born in Seoul, she began playing piano at age five, and later enrolled at the prestigious Yewon Arts School. She furthered her studies in Germany, earning her master’s degree in musical art as a “Konzertexamen” (highest distinction) from Berlin’s Hochschule für Musik Hanns Eisler. She recently received an artist diploma at the Colburn School in its Conservatory of Music.

In fall 2018, Ms. Kim began teaching at the Community School and pre-college Music Academy divisions of the Colburn School.

The festival has received funding from the college’s Cultural Affairs Committee and the Hope College Patrons for the Arts.

The Jack H. Miller Center for Musical Arts is located at 221 Columbia Ave., on Columbia Ave. between Ninth and 10th streets.