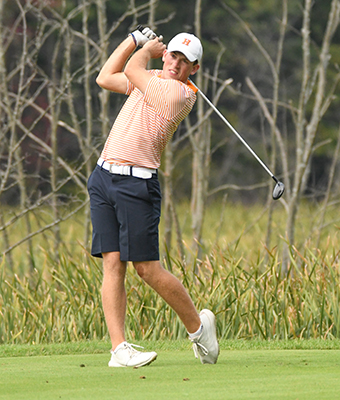 Daniel Settecerri can make his way around a golf course often in sub-par fashion. He is superb in the classroom, too.

The Hope College golfer recently graduated from Hope College with a degree in biology and a 3.99 grade point average. He also has been voted to the Academic All-America® NCAA Division At-Large Teams, as selected by the College Sports Information Directors of America (CoSIDA).

A three-time All-MIAA golfer, Settecerri joins a prestigious group of Hope CoSIDA Academic All-Americans as a second-team selection in the at-large category.

“I am so honored to receive this award,” Settecerri said. “I think it’s a testament to the quality of the academics and athletics there are at Hope. I’m so faithfully supported by mentors, family members, teammates, coaches, athletic trainers and friends. Their encouragement along the way is what makes this award so meaningful and so special to me.”

Despite the cancellation of spring competition during COVID-19, CoSIDA continued its sponsorship of the Academic All-America® awards program. Student-athletes were selected based on career statistics.

CoSIDA has been recognizing student-athletes since 1952 with awards in soccer, volleyball, football, basketball, baseball, softball, track and field/cross country and an at-large program that includes sports for which the NCAA sponsors a championship.

Head men’s golf coach Scott Lokers is thrilled that Settecerri is among the 90 men’s and women’s honorees in the at-large category.

“I am so glad Daniel decided to come to Hope College,” Lokers said. “Daniel is brilliant in the classroom and an incredible competitor on the golf course. But even more importantly, Daniel is a young man who lives out his faith and truly cares about other people.  He has had a profound impact on our team and on my life.”

This fall, Settecerri earned All-Michigan Intercollegiate Athletic Association honors for the third time in his career with a second-team selection. He recorded an 18-hole average score of 75.0 during MIAA play, eighth-lowest in the conference. He was an All-MIAA First-Team selection as a junior and a sophomore.

Settecerri helped the Flying Dutchmen post consecutive Top-10 finishes at the NCAA Championship in 2018 and 2019. The sixth-place finish in 2018 is the highest in team history.

In April, Settecerri was chosen as recipient of the HOPEYs Be Strong. Be True. Male Athlete of the Year honor during the athletic department’s annual awards ceremony.