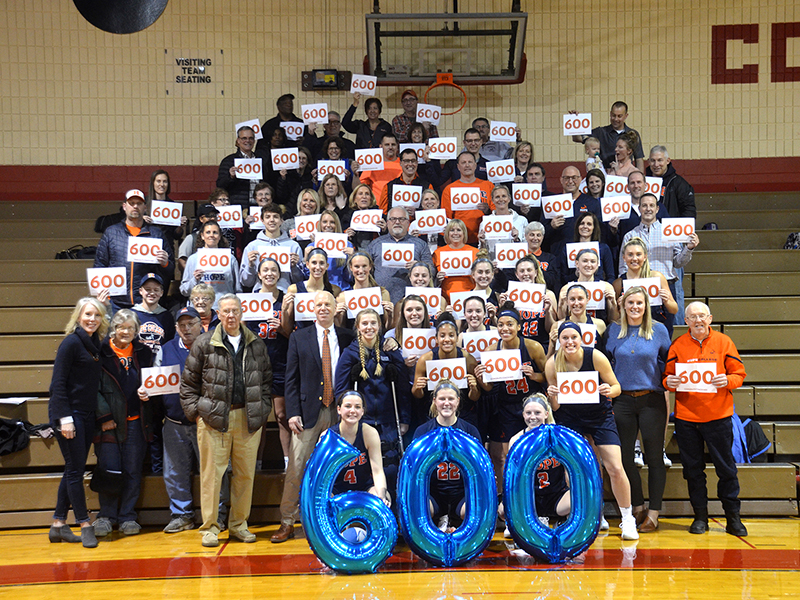 When Brian Morehouse first stepped on the Hope College campus as a student in the fall of 1987, he dreamed of eventually making his mark on the basketball court as a coach.

In his 24th season and 690th game as his alma mater’s women’s basketball coach, Morehouse reached an unprecedented milestone on Saturday after his third-ranked Flying Dutch’s 76-27 win at Olivet College.

Morehouse made it to the 600-win plateau faster than any other NCAA basketball coach, women’s or men’s. The previous record was held by Union University (Tennessee’s Mark Campbell, who achieved 600 wins in 691 games.

"That's like a Mount Rushmore," Morehouse said. "I try to live my life one day at a time and just relish every day as an opportunity. That's why I just have never really gotten count up in the win totals. To me, it's always been about the next game, the next practice."

Hope’s next game is Wednesday, January 29 at Albion College. Tipoff is 7:30 p.m.

"(Assistant coach) Courtney Kust put a little video montage together in the locker room with a bunch of coaches throughout the Women's Basketball Coaches Association who I'm close with, as well as a lot of our former coaches and players in our basketball program and I just lost it," Morehouse said. "People always say 'Win, win, win,' but that's really why I do it.

“It sounds very cliche, but the win total and the milestone didn't really have any effect on me. Then I watched a thank you (video) from former players and coaches that I've coached against. It's just a shared accomplishment with so many people."

Olivet coach Brittany (Berry) Zandstra, a former Hope guard who played for Morehouse from 2011-2015, returned to the sidelines for her first game since December 14 as she continues her battle against ovarian cancer.

"I actually was a part of (Morehouse's) 400th win when I was a sophomore, which makes me feel really old," Zandstra said after the game. "It's never fun to lose, but Mo is one of the best guys I've ever met. He's still a really big part of my life and a mentor for me both on and off the basketball court. I'm so proud of him and it's no coincidence that he has 600 wins.

“He's built a dynasty (at Hope) and it's all a credit to who he is as a person. He develops four-year kids because people want to play for him and nobody wants to leave there."

Morehouse's father Dean, who has been a part of his son's staff for 20 years at Hope, was also proud of Brian's accomplishment.

"We're all proud of him, whether you're his dad, mom, the players, the college, or whoever knows Mo, you're happy for him," the elder Morehouse said. "He puts so much effort and so much heart into what he does.

“He was just saying in the locker room that why he does it is the same reason why I coached: If you can affect a few people's lives and make them better and make them understand how to live their lives any way they want to, then maybe they'll go do the same thing and it will the multiplying factor that we'll just have better and better people. If they come through Hope College, they learn to win in everything, whether it's in the classroom, on the court, or in life."

Freshman guard Meg Morehouse put a smile on her dad's face by scoring the final five points of the third quarter as she drained a 3-pointer and a long jumper.  She also had four rebounds and an emotional embrace with her dad at the end of the game.

"He just said, 'Thank you for letting me do my job so well and I'm so glad we get to share this moment together,'" Meg said. "I've watched him put in so much time at home and today was really special. I'm just really proud of him. He cares about the players more than anything."