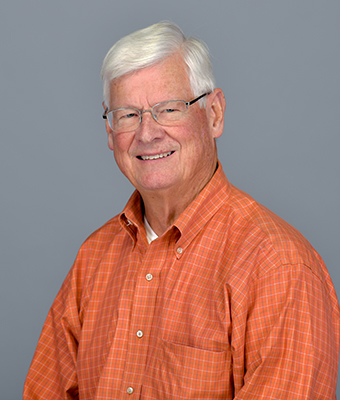 Dr. F. Sheldon Wettack held senior leadership roles, including a presidency, at colleges and universities around the country, but it was to Hope — where he’d begun his career in higher education as a young chemistry professor teaching and mentoring students — that he returned in retirement. And where he taught again for 16-and-a-half years more.

His time at Hope ran across seven decades, initially as a professor and later dean from 1967 to 1982, and since 2004 as a visiting professor.  In between, his career included serving as dean of arts and sciences at the University of Richmond in Virginia; president of Wabash College in Crawfordsville, Indiana; and vice president and dean of faculty at Harvey Mudd College in Claremont, California.  (While at Harvey Mudd he also held an appointment as an adjunct member of Hope’s chemistry faculty from 1995 to 2003.)

“He came back to his first love — teaching and those students,” said his daughter Deb Wettack ’84 Welsch.  “Being around the students’ young energy is part of what kept him young.”

He continued to teach at Hope through the fall 2020 semester and characteristically, with his students in mind, even embraced the adjustments necessitated by the global COVID-19 pandemic.  “Not only did he teach, but at 82 years old he jumped into the whole Zoom process, and he loved it,” Welsch said.

Sheldon Wettack was born on Dec. 5, 1938, in Coffeyville, Kansas, to Frank Sheldon Wettack II and Elizabeth (Gardner) Wettack. Having been raised in a military family, his formative years included living in Japan. The family then settled in Manteca, California, where Sheldon attended high school. It was there that he met the love of his life and future bride, Marilyn Jones. He attended San Jose State College where he received his undergraduate degree and his master’s degree in chemistry. He taught high school chemistry before he and Marilyn moved their young family to Austin, Texas, where Sheldon earned his Ph.D. in chemistry in 1967.

He joined the Hope chemistry faculty that same year.  In addition to his classroom teaching, he mentored about three dozen Hope students with support from a variety of individual research grants, including a Dreyfus Teacher-Scholar Award in 1970, and his research resulted in several publications in professional journals.

When Wettack joined the faculty, Hope’s academic administration was led by a dean of academic affairs and associate dean.  In 1974, to better support the academic program, the college transitioned to its current structure consisting of a provost as chief academic officer and deans representing academic divisions.  Wettack served as Hope’s first dean for the natural and social sciences during the 1974-75 school year as the college transitioned into the new model, continued as dean for the natural sciences from 1975 to 1978 while the social sciences were led by a colleague, and beginning in 1978 again headed both the natural sciences and social sciences divisions (which became separate again in 1982).

Dr. Jane Dickie, who was a member of the psychology faculty from 1972 until retiring in 2012, remembers Wettack as a gracious and supportive colleague, dean and friend.

“When I arrived at Hope’s campus at the age of 25 in 1972 in the psychology department, Sheldon was one of the professors I admired in the science building,” she said.  “At a time when there were only two other women professors in the building, he supported women in science.”

“Later he became my dean and sometimes we disagreed fervently and he calmly listened to everything I had to say. He was very good at that demeanor. Perhaps he learned it from the military family he grew up in,” she said.  “When he returned to Holland in 2004, we renewed our friendship and worked together to try to save the ecology of the Saugatuck sand dunes. He had a great sense of humor and a ready smile. So thoughtful and wise, and rational to a T.”

Wettack left the college in 1982 for his deanship at the University of Richmond, where he served until 1989.  He was subsequently Wabash College’s president from 1989 to 1993, and then at Harvey Mudd College as vice president and dean of faculty until retiring in 2004.

His subsequent visiting appointment at Hope was ostensibly part-time, but Wettack didn’t treat it that way.

“I knew of Sheldon’s outstanding reputation before he returned to Hope, but didn’t know him personally,” recalled Dr. Elizabeth Sanford, professor of chemistry and department chair.  “In his retirement he became a close colleague. He taught part-time and could have kept his involvement to those courses and students, but he fully invested himself in the department, attending our meetings, seminars and other activities.”

“He mentored students and faculty, contributed intellectually to ongoing research and to our first year laboratory program, and started an endowed fund to support students in undergraduate research,” Sanford said.  “He shared his wisdom with humility and, in his understated way, he challenged us as a department to think big and to push past artificial boundaries.”

During 2006, he also served as the interim director of the Midstates Consortium for Math and Science, of which Hope is a member.  In 2007, he delivered the college’s Opening Convocation address.

Among other activity across his career, he was active nationally in Project Kaleidoscope, an organization dedicated to improving undergraduate student learning in mathematics, engineering and the sciences; and the Council on Undergraduate Research (CUR).  He served on a variety of civic and professional boards, and was a member of the Community Church of Douglas, Michigan.

A visitation is scheduled for Saturday, March 6, from 2 p.m. to 5 p.m. at Dykstra Funeral Home - Mulder Chapel, 188 W 32nd St. in Holland.  In lieu of flowers, the family asks that well-wishers please consider making a donation to the Wettack Endowed Fund for Chemistry Research at Hope College.