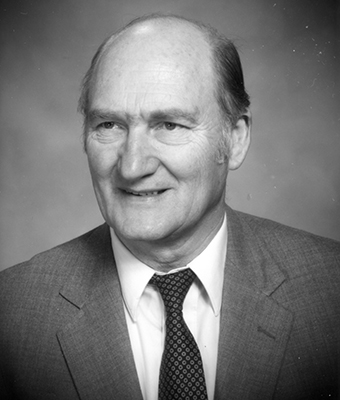 Retired professor Dr. F. Phillip Van Eyl, whose leadership created the scientific foundation of Hope College’s Department of Psychology across more than 30 years on the faculty and who was also the college’s first men’s soccer coach, died on Friday, Aug. 13, 2021. He was 93.

He coached men’s soccer from 1963 to 1967, with the team playing its first varsity season in 1964.  Familiar with soccer because of his own upbringing in the Netherlands, he recalled in later years starting the program especially to provide international students with a familiar team sport.

In honor of his service to Hope, the college’s Alumni Association presented him with one of its two inaugural Meritorious Service Awards in May 1993.

Van Eyl was a native of Haarlem, the Netherlands.  When he was two years old, the family moved from Haarlem to The Hague, where they lived an ordinary life until the Nazi occupation. During the war they lost all of their worldly possessions in a bombardment, but survived the Hunger Winter that left thousands dead. During the last year of the war, at age 17, Van Eyl joined the Dutch Resistance.

In 1949, he immigrated to the United States. Shortly after arriving, he was drafted into the U.S. Army, serving as a paratrooper, squad leader and information NCO for the 188th Regimental Combat Team, 11th Airborne Division.

He attended Hope after his discharge from the army, also becoming a U.S. citizen and marrying Miriam Gemmill ’53.  He subsequently enrolled in Claremont Graduate School in California, from which he earned both a master’s and doctorate in experimental psychology.

When Van Eyl returned to Hope to teach, he and one other professor were the Department of Psychology, sharing a single office in the since-defunct Van Raalte Hall (the building burned in April 1980).  In 1961, the department moved from Van Raalte Hall into a house the college owned. The extra space enabled Van Eyl to design Hope’s first laboratory in experimental psychology, and also provided room for growth.  He also designed laboratories in the Peale Science Center, to which the department next moved when the building opened in 1973.  He taught the department’s first courses in research design, aging and environment psychology, and established Hope’s chapter of Psi Chi - The International Honor Society in Psychology.

His service to the college also included having directed Hope’s summer school and Hope’s first summer program for Japanese students from Meiji Gakuin University. He also gave private Dutch language lessons to Hope and Holland community members, doing so until just months before his death.

In 1968 he spent one year as an educational consultant at Hacettepe University in Ankara, Turkey, under the auspices of the Ford Foundation.  While there, he helped expand the psychology department's graduate program and designed a psychology laboratory. The following year he was a research associate at the Institute for Perception in Soesterberg, the Netherlands, where he worked on a NATO project and a new instructional program for Dutch air traffic controllers.

He loved to travel, a passion he was able to pursue even more during retirement.  He visited all 50 states and all seven continents, visiting more than 60 countries. He also especially loved soccer, the environment and the arts. He served as an elder at Hope Church in Holland, and was also an active member of the Presbyterian Church of Pompano Beach, Florida when he would winter there.

One of his last acts was to present a gift to Hope College to establish a psychology fellowship that will fund collaborative research between faculty and students. In lieu of flowers, the family suggests contributions to Hope College designated for the VanEyl Faculty Fellows.

Arrangements are by Dykstra Funeral Homes-Downtown Chapel.  A memorial service will be held on Saturday, Aug. 28, at 10 a.m. at Hope Church, located at 77 W. 11th Street in Holland, with the Rev. Jill Russell officiating.  Burial will be in Pilgrim Home Cemetery.