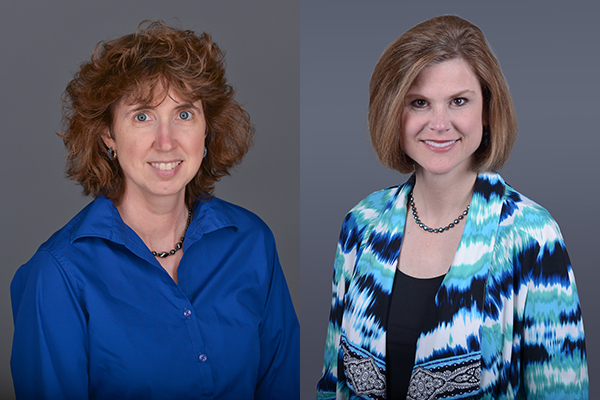 Dr. Mary Inman and Dr. Charlotte vanOyen Witvliet of the Hope College psychology faculty have been recognized as Fellows by the Midwestern Psychological Association (MPA).

To be named an MPA Fellow is the highest honor that the association can bestow on a
member. Selection requires evidence of significant contributions to the discipline of psychology and/or
service to the MPA in terms of scholarship, productivity, leadership and visibility. Fellows are selected by
a committee including the MPA’s president-elect, current president and past-president after having been
nominated.

Three other members of the college’s psychology faculty were named Fellows in earlier
years. Dr. David G. Myers and the late Dr. John J. Shaughnessy (who died in 2015) were honored in
2010, and Dr. Daryl Van Tongeren was honored in 2019.

Inman is a professor of psychology at Hope, where she has been a member of the faculty
since 1999. She is an active researcher who mentors students through collaborative participation in her

research, teaches courses such as Social Psychology and Research Methods, and has served the
college in a variety of ways.

Her publications include two books that teach students how to conduct psychological
research as well as over 30 articles, many co-authored with students, published in refereed professional
journals about her research. Her student research team has won the Psi Chi Regional Research Award.
She has received a variety of external and internal grants in support of her research.

Inman was elected into the Society of Experimental Social Psychology in 2003. In 2011,
she received the college’s Provost’s Award for Service to the Academic Program for her work as chair of
the Human Subject Review Board and her work on diversity training. She has also won teaching awards
from her students. Among other participation in the life of the college through the years, she has
contributed her scholarly expertise to campus discussions related to racism and discrimination. In 2000,
she organized a professional conference at the college that featured several Hope alumni who were
either teaching or in graduate school and conducting research related to discrimination.
She graduated from Iowa State University in 1987 with a bachelor’s degree in
psychology. She completed her master’s degree in doctorate in social psychology at the University of
Iowa in 1989 and 1992, respectively.

has been a member of the Hope faculty since 1997.

Her primary research contributions have focused on forgiveness and its emotional and
physiological side effects. Additionally, she has conducted research in trauma, mental health, emotion
and psychophysiology. Her lab also studies repentance, self-forgiveness, empathy, gratitude, humility,
hope and accountability.

Witvliet has 80 publications and 140 professional presentations in local, national and
international venues. She has been a member of national, multi-year, interdisciplinary work groups on the
pursuit of happiness, leading from the soul, and living accountably. She has been principal investigator
on six external research grants from the Templeton Religion Trust, John Templeton Foundation, and the
Fetzer Institute.

She has mentored many Hope students in research on mental health, physiology and
embodied virtue, and they have become co-authors on a fifth of her publications and half of the
conference presentations from her lab. Her research teams have won 13 Psi Chi Regional Research
Awards.

Witvliet has conducted more than 145 media interviews, especially about forgiveness,
with her research featured in venues such as Time, Newsweek, USA Today, the Los Angeles Times, the
Chicago Tribune, CNN, ABC, CBS, Michigan Radio, The Science of Happiness with Public Radio
International, and international newspapers. Her research is referenced in blogs and books, including
“The Book of Joy,” co-authored by Desmond Tutu and the Dalai Lama in 2016, and “The Science of the
Virtues: Why Positive Psychology Matters to the Church” by Mark McMinn in 2017.

She has received honors from Hope including a 2000-04 Towsley Research Scholar
Award and the 2008 Ruth and John Reed Faculty Achievement Award, and held the John H. and Jeanne
M. Jacobson professorship from 2011 to 2015. She delivered the college’s Opening Convocation
address in 2012.

Before joining the Hope faculty, she trained as a scientist-practitioner clinical psychologist
at Purdue University and completed her predoctoral internship at the Durham Veterans Affairs Medical
Center affiliated with Duke University.

Witvliet graduated from Calvin College with a B.A. in psychology and music in 1991, and
completed her M.S. and Ph.D. in clinical psychology at Purdue University in 1993 and 1997 respectively.
The Midwestern Psychological Association has members from universities, colleges,
hospitals, clinics, school systems, business and industry, government and private practice. The MPA’s

purpose is to promote the advancement of psychological science by conducting an annual meeting at
which papers, posters and symposia addressing psychological research may be presented. The
association’s 93 rd annual meeting will be held on April 22-24, and will take place virtually this year
because of the global COVID-19 pandemic.