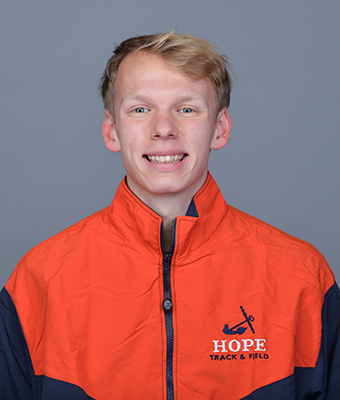 Hope College runner Nick Hoffman has been chosen for the 2020-21 Academic All-America® Division III Men's Track and Field/Cross Country Team, as selected by the College Sports Information Directors of America.

A junior public accounting major with a 3.81 grade point average, Hoffman is one of 46 men’s honorees and one of 14 second-team selections.

“It’s a great honor for him and well-deserved,” Cole said. “He works really hard at both his schoolwork and his running. He’s really respected in the conference and beyond. I’m really glad he’s back for another year. I’m super excited about what he is going to be able to do for us.”

Said Northuis, “Nick is graduating in four years with a degree that normally takes five years to earn and is one of the top distance runners in the nation. The example he provides to the team is very valuable as others pursue excellence as scholar-athletes. We’re very excited to have an opportunity to work with Nick another year and have him as a team leader.”

During the outdoor track and field season, Hoffman recorded the highest men's 1,500-meter finish in Hope history with a third-place, All-America effort in May. He also earned MIAA Most Valuable Track Athlete honors after winning league championships in the 800 and 1,500.

During the indoor track and field season, Hoffman (Holland, Michigan / Holland HS) also claimed the MIAA Most Valuable Track Athlete honors after winning league titles in the 1-mile run and the 3,000 meters. He was runner-up in the 1-mile run at the Elite Indoor Championships.

Hoffman did not compete in cross country last school year because the season was canceled due to the COVID-19 pandemic.