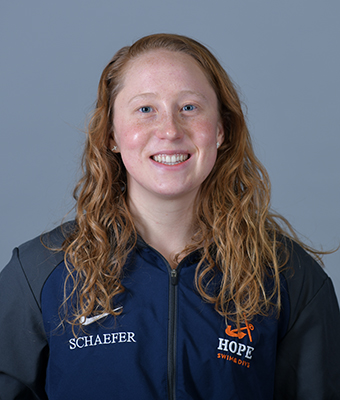 The senior from St. Johns, Michigan (DeWitt HS), is receiving MIAA Most Valuable honors for the second consecutive season. She is the fifth Flying Dutch swimmer to accomplish that feat.

At the 2021 MIAA Championships earlier this month, Schaefer won three individual events and one relay to help Hope claim an MIAA team championship.

In the 200 individual medley, Schaefer eclipsed her school record with a time of 2:04.92 while winning for the third consecutive season. Her previous best of 2:06.58 happened in 2019.

In the 100 breaststroke, Schaefer lowered her own school record to 1:03.75. She also swam on the winning 400 medley relay.

“Emma continues to show no signs of slowing down,” head coach Jake Taber said. “Her drive and work ethic were on full display this season as she repeated as league MVP.”

Tessin earned MIAA titles in the 50-yard freestyle in 23.60 seconds and the 400 medley relay. The freshman from Waxhaw, North Carolina (Marvin Ridge) also took seventh in the 100 free and 11th in the 200 backstroke.

“Madeline just kept getting better and better this year,” Taber said. “Her willingness to do what the team needs is well respected. Despite some very big time drops, I think she's really just scratching the surface of what she's capable of accomplishing in the pool.”

Gamm was MIAA champion in the 400 medley relay. The freshman from Rockford, Michigan (Rockford) also took third in the 100 butterfly and the 100 back as well as fifth in the 200 fly

“Rachel is such a competitor and it shows every time she steps up on the block,” Taber said. “I love her instincts on the block. She continues to demonstrate the will to get the job done.:

Wesolek also was an MIAA champion in the 400 medley relay. The freshman from Bay City, Michigan (John Glenn) placed second in the 200 free and 200 back as well as fifth in the 100 free.

“Delaney is always wearing a smile, even when she's in the middle of a main set,” Taber said. “She's so well respected by her teammates and brings out the best in them. She's been such a wonderful addition to the program.”

Estabrook, a freshman from Carmel, Indiana (Carmel), finished third in the 400 IM as well as fourth in both the 500 free and 1,650 free

“I feel like as the season went on, Jess swam with more and more confidence,” Taber said. “Despite transitioning into the distance events this year and swimming some new things, she was able to rise up and take everything in stride.”

“Our junior captain is one someone our young core looks up to. Aubrey comes to work every day,” East said. “She pushes herself in the weight room, in the dryland workouts as well as the water.  I'm really excited for her.”

O’Donnell, a freshman from Lincolnshire, Illinois (Stevenson) came in third in the 100 free and fifth in both the 100 fly and 200 free.

“Even though she's just a freshman, I think she's pretty close to a household name in the MIAA,” Taber said. “She is someone that I would hate to have to write a lineup against because she's so talented and versatile. She does so many things well.”

Hamilton, a freshman from Libertyville, Illinois (Libertyville), placed third on both the 1- and 3-meter diving boards.

“The potential ceiling here for Cam is very high,” Taber said. “It's exciting to think about what she will be capable of in consistent years and board time. She absolutely showed flashes of brilliance this season.”