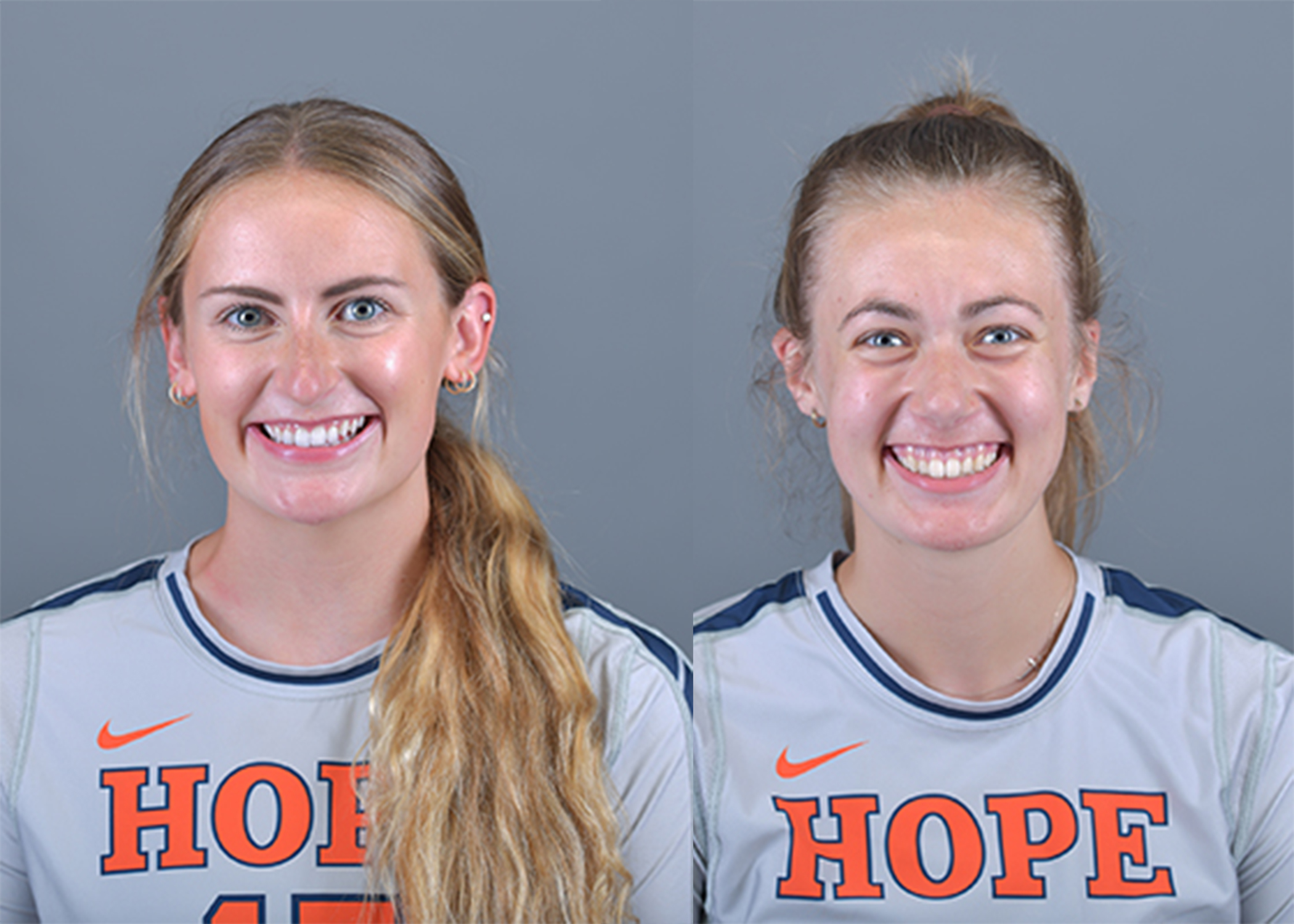 The NCAA presents up to 126 postgraduate scholarships annually.  The scholarships are awarded to student-athletes who excel academically and athletically, and who are at least in their final year of intercollegiate athletics competition.

“My experience coaching McKenna and Tracy has been nothing short of incredible,” said head volleyball coach Becky Schmidt. “Both student-athletes are hard-working and have high standards of themselves and others.  They are two of the most others-centered people that I have ever met and their humility makes them incredible teammates.”

The one-time, non-renewable scholarships of $10,000 are awarded three times a year corresponding to each sport season (fall, winter and spring). Each season there are 21 scholarships available for men and 21 scholarships for women for use in an accredited graduate program.

Otto and Westra are the 29th and 30th Hope College recipients overall of the postgraduate scholarships since 1974. It is the first time that two members of the same athletic team at Hope have received the scholarships in the same season.

They are also the third and fourth members of the volleyball team to have received the awards since 1974. Their Hope volleyball predecessors include Schmidt, honored as a graduating senior in 1999.

Otto’s and Westra’s scholarships follow multiple league, regional and national honors across the past four years for each of the graduating seniors.  Schmidt reflected on some of the qualities on the court and off the court that she noted make the accolades well deserved for both Otto, a middle blocker from Wheaton, Illinois; and Westra, a setter from Clarendon Hills, Illinois.

“McKenna has been a leader since the first day that she stepped onto our court.  Her physical presence is matched by a huge heart that leads to everyone around her giving their best and having a great time doing it,” she said. “Tracy has embraced every challenge we have laid in front of her.  She is an eager learner and keenly aware of what she can do to facilitate success in others — an important skill for a setter.  She has a steady presence about her and is driven to succeed which was exemplified by the fact that she played the entire season with a shoulder injury.”

“Both of these young ladies are the epitome of what it looks like to excel on the court and off of it,” Schmidt said.  “I am incredibly proud of them and thankful for the legacy they are leaving in our program.”

Otto is majoring in engineering with a biomechanical concentration.  Interested in a career in product management, specifically in the sporting-goods industry, she plans to work for a year to gain experience in the industry and then pursue an MBA.

Otto was honored by the college as a Clare Boothe Luce Research Scholar in 2019.  She participated in collaborative student faculty research from the summer of 2019 through her junior year with Dr. Katharine Polasek, associate professor of engineering, investigating a method for a non-invasive therapy for phantom limb pain.  She will be attending the college’s Thriving in Transitions May Term course in Alaska following the conclusion of the spring semester.

In addition to volleyball and research, her co-curricular activities include serving as a representative on the college’s Athletes Coming Together/Student-Athlete Advisory Committee (ACT/SAAC) and a campus tour guide.  She is a 2018 graduate of Wheaton North High School.

Westra is a civil engineering major.  She will be working in the coming year and considering graduate school in engineering for the future.

Westra was honored by the college as a Clare Boothe Luce Research Scholar in 2019.  She participated in collaborative student faculty research during the summer of 2019 with Dr. Michael Misovich, associate professor of engineering, investigating simpler equations for finding vapor pressures using chemical modeling and computer programming.  She also held off-campus summer internships in storm water engineering in 2020, and in civil engineering in 2021.  She will be attending the college’s Thriving in Transitions May Term course in Alaska following the conclusion of the spring semester.

In addition to volleyball and research, her co-curricular activities have included Hope Advocates for Sustainability and the student-organized Dance Marathon held on behalf of Helen DeVos Children’s Hospital.  She is a 2018 graduate of Timothy Christian High School.

The teammates helped the Flying Dutch post a 25-5 record this fall that included going 8-0 in MIAA competition, winning the MIAA regular-season championship and reaching the NCAA Division III regional finals.