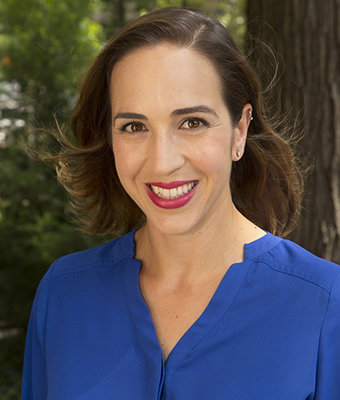 Dr. Chantal Rodriguez, who is associate dean of the David Geffen School of Drama at Yale University, will present the address “Teatro on the Picket Line: César Chávez, Luis Valdez, and the birth of Chicano Theater” as this year’s annual César Chávez Lecture at Hope College on Thursday, March 31, at 4 p.m. in Schaap Auditorium of the Jim and Martie Bultman Student Center.

The keynote address will focus on a historical overview of the origins of the theatre company El Teatro Campesino on the picket lines of Delano, California. The lecture will explore the profound influence of César Chávez and the United Farm Workers on the political and artistic trajectory of the Chicano theater movement.

Rodriguez is also an assistant professor adjunct of dramaturgy and dramatic criticism, and serves as the David Geffen School of Drama’s Title IX and discrimination and harassment resource coordinator. She is a scholar of Latinx and Chicano theater, and also works as a dramaturg and producer.

From 2009 to 2016, she was the programming director and literary manager of the Latino Theater Company, operators of the Los Angeles Theatre Center. She is the co-editor of “Seeking Common Ground: Latinx and Latin American Theatre and Performance” (Methuen Drama, 2021), “What’s Next for Latinx” volume 49.1 of Yale’s Theater Magazine (2019), and “Encuentro: Latinx Performance for the New American Theater” (Northwestern University Press, 2019). She is the author of “The Latino Theatre Initiative/Center Theatre Group Papers” (UCLA Chicano Studies Research Center Press, 2011), which was nominated for three Latino Literacy Now International Book Awards. Her scholarly work has also been published in Theatre Journal, Latin American Theatre Review, e-misférica, and Theatre Research International.  She is a member of the Latinx Theatre Commons Advisory Committee, and the National Advisory Board for the 50 Playwrights Project.

The event is being co-sponsored by the college’s Center for Diversity and Inclusion, the Latino Student Organization, the Department of Theatre and the campus-wide GROW (Growing Relationships through diverse Opportunities to strengthen involvement in an ever-changing World) initiative.

Due to the ongoing global COVID-19 pandemic, the organizers are requiring that masks be worn during the event.

The Jim and Martie Bultman Student Center is located at 115 E. 12th St., at the center of the Hope campus between College and Columbia avenues along the former 12th Street.  Schaap Auditorium is near the building’s southwest corner.