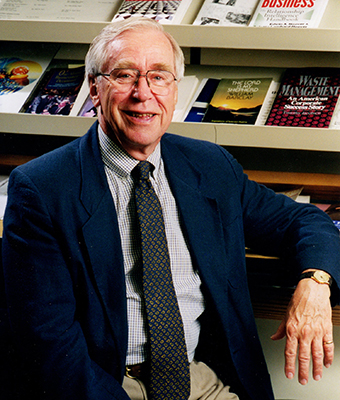 Robert N. DeYoung of Holland, who across 35 years at Hope earned the affectionate sobriquet “Mr. Hope College” through his service in admissions, student development and college advancement, died on Monday, Aug. 1, 2022. He was 89.

The citation for the Meritorious Service Award that the college’s Alumni Association presented him in 2014 celebrated not only his impact through the variety of roles that he had held at Hope, but his characteristic warmth and genuine focus on individuals: “Bob has often been defined as ‘Mr. Hope College,’ which is a perfect description.  His personal service to Hope has been developing life-long relationships with students, alumni and friends of the college.  Professionally his Hope College journey has allowed him to serve the college in admissions, student affairs and college advancement all with conspicuous success.”

For more about Bob DeYoung and his time and impact at Hope, please visit this link to read the feature story published on pages 7 and 15 of the August 2000 issue of News from Hope College in conjunction with his retirement.

In addition to his 2014 Meritorious Service Award, DeYoung received the sixth annual “Hope for Humanity” award from the college’s Alumni H-Club in 1995, and a Distinguished Alumni Award from the Hope College Alumni Association in 1999. Hope’s annual golf outing, established during his leadership of development and college relations, was named in his honor in 2000; and in 2009 the volleyball gymnasium in the college’s DeVos Fieldhouse was named in honor of DeYoung and his wife, Marcia, a 1955 graduate who died on Jan. 3, 2007.  Bob and Marcia are also remembered through the college’s Robert N. ’56 and Marcia J. ’55 DeYoung Scholarship Fund, established by friends and family in recognition of Bob’s 35 years of service to Hope and the couple’s lifelong commitment to the field of education, with preference given to students with financial need who are intending to become educators.

He also received external acclaim as an advancement professional.  In 1989, he received the Benjamin Franklin Award for fund raising management from the West Michigan Chapter of the National Society of Fund-Raising Executives (NSFRE).  Under his leadership, Hope was recognized nationally for outstanding fundraising management, including twice in a row (1988 and 1989) receiving the CASE/USX (Council for Advancement and Support of Education and USX Foundation) award for the best total development program among all U.S. undergraduate colleges with more than 10,000 alumni.

He was active in church, community and professional organizations.  He served the Holland community in various capacities through the Chamber of Commerce (from which he received the Distinguished Service Award in 1996), Evergreen Commons, Rotary, Calvary Reformed Church and the Holland Country Club.

In addition to his undergraduate degree from Hope, he held a Master of Arts degree from Western Michigan University.  Prior to joining the Hope staff, he taught, coached football and was a counselor at Whitehall High School, and was on the admissions staffs at both Michigan State University and Grand Valley State University.

Visitation will be on Friday, Aug. 12, from 9:30 a.m. to 10:45 a.m. at Calvary Reformed Church, 995 E. 8th St. in Holland.  A memorial service to celebrate Bob’s life will be held at the church on Friday, Aug. 12, at 11 a.m., immediately following visitation, with the Rev. Tim Brown officiating.  There will be a time of fellowship following the service.  Burial will be in Pilgrim Home Cemetery.  Arrangements are by Dykstra Funeral Homes – Mulder Chapel, which is hosting his life story/obituary online.

The family has requested that those who are interested in making memorial contributions donate to the Bob and Marcia DeYoung Endowed Scholarship.  Gifts may be made via this link.