The Insignia of Office

The insignia of the office of the president of Hope College is a bronze cast medallion suspended from a bronze chain. 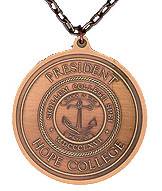 The presidential medallion, three-and-a-half inches in diameter, was struck for the first time in honor of the inauguration of President Jacobson. It is worn by the president at ceremonial academic occasions.

On front of the medallion is the college seal. In the center is an anchor, a symbol of the college’s Christian heritage. Written above the anchor is Hope’s motto, Spera in Deo, “Hope in God,” which is drawn from Psalm 42:5 — “Put your hope in God, for I will yet praise him, my Savior and my God.” The college’s name, motto and seal are all derived from a statement made by the founder of Holland and co-founder of Hope College, the Reverend Albertus C. Van Raalte, who said of the school, “This is my Anchor of Hope for this people in the future.” Around the college seal, in relief, are the words, “President” and “Hope College.”

The reverse side of the medallion has the names of the founder and first nine presidents of the college cast around the outside edge. Other presidents, beginning with the 10th president, John H. Jacobson, are engraved in the middle, along with the date of inauguration.