Lecture Will Explore Far-Reaching Impact of Amsterdam on Tuesday 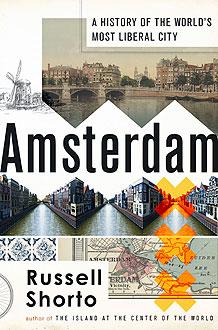 Author Russell Shorto will present the lecture “Amsterdam: A History of the World’s Most Liberal City,” based on his new book of the same name, at Hope College on Tuesday, Nov. 19, at 7 p.m. in the DeWitt Center main theatre.

The address will consider topics including how the city became a global exporter of some of the major tenets of Western liberalism, as well as the Dutch impact on American values and culture.  The abstract for the presentation notes, “Legalized prostitution, lax drug laws, and a generous social welfare system have given Amsterdam a reputation for being ‘the most liberal place on earth.’ But the city also fosters the deeper meaning of liberalism that profoundly influenced America-political and economic freedom.  Historically, Amsterdam has been home not only to religious dissidents and radical thinkers, but also to the world’s first global corporation, the United East India Company.”

Shorto is the author of numerous books, including the “New York Times” best-seller “The Island at the Center of the World: the Epic Story of Dutch Manhattan and the Forgotten Colony that Shaped the World” (2004).  He is also a contributing writer for the “New York Times Magazine.”

His books have been published in 14 languages, and he has won numerous awards.  In 2009, he received a Dutch knighthood in the Order of Orange-Nassau for his services in strengthening the relationship between the Netherlands and the United States.

The address is sponsored by Random House, the Netherland-America Foundation, the Van Raalte Institute at Hope College and the Dutch Heritage Coordinating Council.

A reception will follow in the main floor Collegiate Lounge of the DeWitt Center, and there will also be a book signing after the lecture.  In addition, copies of the book will be on sale at a reduced price.